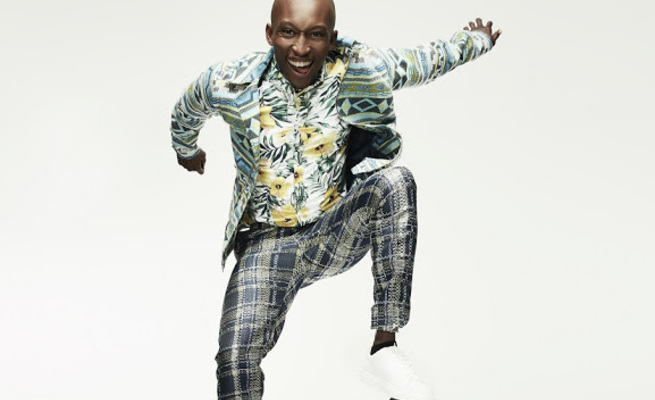 Siphesihle Vazi can see himself floating above the car that is rushing him to hospital. In the backseat of a teacher’s car, he is barely clinging on to life as his chest closes in from a near-fatal asthma attack.

The seven-year-old is trying to keep his eyes open at the behest of his teacher when he starts to float above the car. Luckily, he makes it to the hospital in time to be nebulised, and breathes life back into his body.

Today, the 27-year-old actor and TV presenter is the picture of health as he attempts to perform a trick on a skateboard for the perfect shot on our set. “Vazi”, as he is popularly known, arrives right on time for his shoot, a sign of the professionalism that has seen him grow into prominence on the South African media scene.

The Madadeni, KwaZulu-Natal, native describes his near-death experience to me a few days later when we meet for his interview. He is drinking a cappuccino that he later upgrades to a cider, a hint of one of his nine tattoos evident from under his black t-shirt. His first-ever ink was the phrase “stay humble” which he got “when I started making my own money” as a bartender at a popular establishment in Auckland Park.

“That’s always been my motto, regardless of whatever happens,” he says. Another is an inscription of the words “Duku Duku” on his right inner forearm. It’s a simple homage to the legendary show, Selimathunzi, which gave him his big break back in 2015. He was initially just meant to do a segment, but the producers liked his work so much that he ultimately landed a full-time gig, which he still enjoys.

On the surface, Vazi appears to be the stereotypical TV presenter: good looks, great physique, and a megawatt smile. But the more he regales me with tales about his life, the more apparent it becomes that there is more to him than has previously been seen.

Fans are getting a glimpse of his big personality on the current season of Tropika Island of Treasure. The primetime show, which is currently airing on SABC3, sees celebrities paired up with a fan, and tasked to undertake a series of physical and mental challenges in order to stand a chance of winning R1-million.

“I’ve always wanted to be on Tropika Island,” he says excitedly. “This season has a couple of twists, so much so that it shocked us contestants,” he says. One half of team “MangoPeach”, he says this season comes with a lot of drama, “which is pretty dope”.

On the show, Vazi’s athleticism is evident, although he says he is not too intense with his workouts. “I don’t set body goals per se because I know how to feed my body. I’ve been doing gym and training, and knowing how to take care of my body since I was 15.”

His competitive streak is also revealed on the show, something he has been honing since school when he played rugby. At an Afrikaans-medium high school in Ermelo, which he attended through a rugby scholarship, he shone on the field as a star winger, ultimately making the first team in Grade 11.

A devastating injury to his left knee ended his career and almost left him unable to walk properly. While making a huge tackle, he collided with the opposition player, splitting his kneecap into three. He was unable to walk for months. “So once I got on my feet, I could only bend my knee at 15 degrees. I was told that I would never walk again,” he recalls.

But his tenacity (he has a tattoo of a lion on his chest, a reminder that he has the heart of a lion), saw him eventually gain full mobility. Always seeking to push himself, Vazi recently added actor to his accolades, starring in the popular series Makoti, where he played Mthoko opposite Thuli Phongolo, his onscreen wife.

He says the show taught him the importance of communication in relationships. “Also just boundaries, a lot about boundaries,” he says. One way he has introduced clear boundaries is in his refusal to talk publicly about his romantic relationships. It’s part of how he maintains his peace — something that is important to him.

Considering the sometimes-fickle industry he is in, Vazi is very pragmatic about his approach. “If one thing doesn’t work out, it doesn’t mean the next will also follow suit. If I’m off TV tomorrow, God forbid, it’s not the end of the world,” he says resolutely. “I’ve made so many contacts, I’ve made so many relationships, that I can still carry on with my life.”

His BA degree in marketing communication also comes to use in the other entrepreneurial ventures he is involved in. Beyond the silver screen, “life has brought me back to what I’ve always liked, which is marketing and communication,” he says. He has his finger in a number of pies with his company, Rise Vukani, including outdoor marketing and project management and is also looking to do production. Giving back to the community is also important to him and he makes a point of doing community outreach.

Although he understands that fame can be temporary, he is making the most of it while he can. “If I were to sit down and go through the things that I’ve done and the possibilities that have been opened for me via my job, I could safely say that I’ve been super, super lucky.”

So how long does he want to keep doing this? “I’m planning on being here for long. I want to explore everything that the industry has to offer. I have my own pace with what I want.”