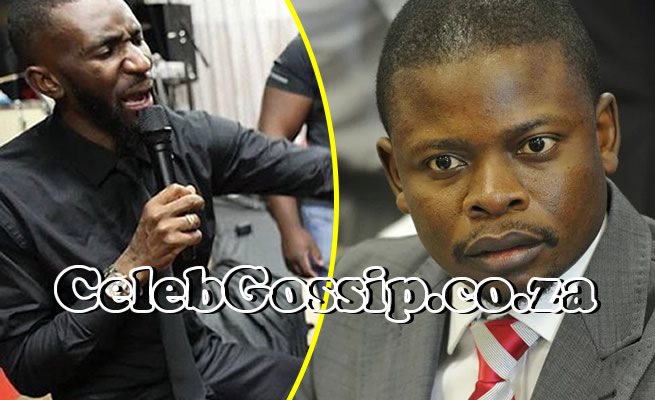 Leader of Kingdom Embassy church, Prophet Passion Java, who grabbed headlines several years ago when he flighted an advert in the press claiming that he was the ONLY prophet who could "prophesy" anyone's date of birth and ID number has sensationally claimed that he has seen a vision of South Africa based Prophet Shepherd Bushiri dying in December.

"I am still praying for Prophet Shepherd Bushiri but I saw him dying in the month of December. It's all in my book, if you have not downloaded it, its called 'I have already told you'. I prophesied what will happen January to December. There are things that I reversed for January.

"I could not even put them in the book because I had already reversed them. But Prophet Bushiri is a great man. So I needed more grace, so when I met Melchizedek (priest in Biblical times) now, I was given certain powers. Praying and I'm actually fasting some of the days to reverse it so that it does not happen because there are souls that need him because his assignment is great and big," the Zimbabwean prophet, who is now based in United States says while allegedly prophesying.

The so called prophesy did not go down to well with the founder of Enlightened Christian Gathering Church (ECG), Prophet Shepherd Bushiri who did not have kind words for his fellow 'tradesman'. Bushiri was so infuriated that he flatly declared Prophet Java a fake prophet!

"Trying to prophecy about about my death… some, some attention seekers, looking for attention to become popular and fame using some peoples' names… and trying like oh I saw it in the spirit, he's gonna die… just, just for attention. We are around, we are not going anywhere…. Powerful… My God….," says part of his response as he breathes fire.

"And I won't even mention his name, because that's what he wanted to say… when I say, Major One will say my name… Um, I'm not saying his name because he is fake. That's fake. I'm not dying, " he added before his congregation broke into ululation and celebration.

"It's not right, it's not, it's not even Godly to be using some people's names…. you don't play with words of death. That's a serious issue. Just to become popular you wanna, you wanna use somebody's name," the visibly shaken and traumatised prophet Bushiri says in conclusion.

Prophet Passion Java, who is now popularly known as "Twabam" in Zimbabwe, following his controversial Youtube video where he was showing off some of his belongings and assets, while mentioning the word 'twabam' throughout his 'presentation', was once a spiritual son to another equally controverial Zimbabwean prophet, Uebert Angel, who is now based in United Kingdom.

Interestingly, Prophet Bushiri and Prophet Java were both introduced to the prophetic ministry by the same man – Prophet Uebert Angel. However, the ‘spiritual alliance’ between Prophet Passion Java and Prophet Uebert Angel collapsed two years ago. So bad was the fallout that Prophet Java, who had named his son after Uebert had to change the young boy's name and birth certificate too.

Prophet Passion Java, who is the founder of Kingdom Embassy church, also grabbed headlines in 2015 when he divorced his wife, Yasmin whom he had been in holy matrimony with for four years. When the two got married, Yasmin’s family did not approve of their marriage since they are from a Muslim background. That eventually became the backbone of their divorce, four years later.

CelebGossip.co.za reported several years ago that Yasmin's grandmother was at one time breathing fire, claiming that Prophet Passion had 'snatched' Yasmin without following the proper lobola process. In fact, the elderly grandmother said Prophet Passion was co-habiting with her grandchild.

Prophet Java, who never ran short of surprises throughout his 'career', once pulled a shocker when he celebrated his 24th birthday for THREE SOLID DAYS and closed Harare's First Street where his church was situated before the landlord evicted him. He was doing it the P-Diddy way. He held THREE colourful birthday celebrations AT THREE VENUES and on THREE DIFFERENT DAYS – exactly the P-Diddy style, from Friday morning till Sunday night.

One needs counter book to write all the shocking headlines Prophet Passion Java once grabbed. At one time he shocked many when he allegedly conducted a miracle abortion. In February 2013, H-Metro reported that Prophet Passion allegedly prayed for a young woman who was pregnant and wanted to terminate her unwanted pregnancy. The tabloid reported that at the instigation of the man of God's prayer, the pregnancy allegedly disappeared.

"I was four months pregnant and as you can see my tummy is now flat to show that I am no longer pregnant, I was impregnated by my boyfriend four months ago but he has dumped me so I wasn’t prepared to look after the child because I am currently unemployed so I came here expectant of my miracle," she said.