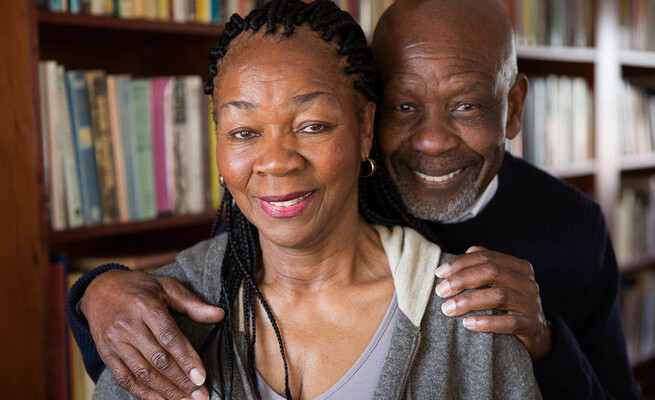 Some people believe there is what is called ‘love at first sight' and for South Africa's ambassador of sound Caiphus Semenya (80) and his wife Letta Mbulu (77), the notion rings true.
The music icon and his beautiful wife have been in happy matrimony for more than 50 years, and their candle of love and music is still glowing bright, as ever.

The couple have lightened up South African music for some time, and seem they continue doing so, as despite their ages, the two hasn’t shown any signs of fatigue.
Caiphus’ Angelina and Matswale, and Letta’s Not Yet Uhuru and Ndiphendule are still hot hits at weddings and social conventions up to now. How they managed to stand the test of the times is surprising– even to them.

In an interview with Move magazine, Caiphus admitted to the surprise; “It really is a surprise to me that my music is still being played more than 30 years later. I didn’t plan or expect it but I’m truly grateful.”

Letta, stated that good lyrics that relate well with people's lives is the reason why their music is still relevant, many years after composition.
In May this year, the musical couple commemorated 54 years of marriage, a feat many celebrities today, are failing to achieve.

Most of today’s crop of prominent personalities on the entertainment scene, are dogged with break ups, and for Letta and Caiphus being together so long means they’ve seen each other through in good and bad times.

Caiphus “has a terrible temper” but she’s used to him, Letta said. “Besides, he’s a Leo and can’t help himself.

“Other than that, he is an amazing man, he’s very supportive and loving. He also has a sense of humour,” she added smiling.

Love could be seen written all over his face, as Caiphus looked at Letta as she spoke. He said he fell in love with her at first sight.
“Whenn I met her, I genuinely fell in love with her. So far she hasn’t done anything to make me want to terminate our marriage,” he joked, exhibiting declared sense of humour.

“Disagreements happen all the time,” he continued, more seriously. “But what I love about her is that she is a very responsible mother, wife and artist. She is a true African woman and I try to be a true African man.”

As stated by Letta, there is nothing like a formula to a happy union in marriage, other than respect, understanding, honesty, and forgiveness. She believes that since marriage is not bullet proofed against disagreements, being truthful and having respect for each other is the key.

They have both been successful in their careers and it hasn’t interfered with their marriage. It all boils down to valuing each other, so they say.

Letta said there is this element among musicians couples, of competing with each other, but she and Caiphus managed to avoid such scenarios, through knowing each other's space and respecting each other's talents.

One of the couple's most daunting encounter in their long marriage was living in exile in America and raising their two boys, Muntuyetwa and Mosese, away from the loving comfort of friends and relatives.
Through thick and thin, ups and downs in their lives, they made sure their children do not forget their roots.

“We took them to a private African school in the US. We also had rules. When they came home, they abided by our rules. The language had to change when they were home: no English in the house – only Sesotho and isiXhosa,” Letta said.

Though dynamic, their philosophy largely remained being a modern family with elements of old school values. And the couple is passing the stick to their children.

The Semenya family recently got together to honour the towering father figure. The man behind Nomalanga celebrated his 80th birthday on 19 August. Which the birthday boy, Semenya described as a blessing to live such a long life.

His wife planned the birthday in style with a star-studded concert at The Market Theatre in Johannesburg. Music stars Tsepo Tshola, Sipho Hotstix Mabuse and Condry Ziqubu all paid tribute to the legendary ‘Caiphus.’

The takings from the concert will go to the singer’s National Academy of Africa’s Performing Arts in Soweto.

Caiphus, is inspired by Mahatma Gandhi’s quote “Be the change you want to see in the world”, started the academy as a vehicle of transformation.

“My dream started in 1964. I wanted to get into a music school in the United States while I was in exile, but I couldn’t because I couldn’t read.

“I had an ear for music but that wasn’t enough. For three months a friend of a friend taught me to read music. When I came back home after 27 years I knew I needed to start a school for music,” he narrated.

He presented a proposal, to former president Nelson Mandela. The pitch, was widely circulated, in the corridors of power, but nothing came of it. Then two years ago, a determined Caiphus drafted another proposal and sent it to arts and culture minister Nathi Mthethwa, who gave a R10 million donation to the school, will cost R34m to complete.

The business aspect of the performing arts will be a compulsory subject. “We still need more money for equipment and furniture and hope to open doors in 2021,” Semenya concluded.