The actor made headlines last week after sharing a picture of his wife and a man he referred to as Chiskop.

“When a man enters your house, gets intimate with your wife while your children are in the house knowing full well that you are the husband and then publicises their pictures on social media for the world to see, what is meant to happen?,” he captioned the image, which has since been deleted.

#MorningLiveNewsWithAdvovo As it stands now divorce proceedings are currently underway and have been since January 2018. #HlomlaDandala #Chiskop

#MorningLiveNewsWithAdvovo Initially they broke up Jan 2018 but tried to make it work. Though every effort was made to stay together, the relationship became irreparable ending up with Hlomla’s wife asking him to move out in August last year. #HlomlaDandala #Chiskop

#MorningLiveNewsWithAdvovo Hlomla & his wife have been together since 2008 but have been separated & living apart since Aug 2018 after cracks in their marriage started to show. More so after Hlomla Dandala FATHERED A 6TH CHILD WITH A 4TH WOMAN 3 YEARS AGO. #HlomlaDandala #Chiskop

Some went so far as to claim he deserved to be cheated on as he had allegedly done the same to his previous wife, a claim Hlomla has denied in the past.

The actor has no regrets about letting the public know his feelings.

“So for the record, now that it’s out, I don’t regret hurting. I regret to succumbing to social media pressures of bottling my hurt and storing it for so long that it came out this way.” 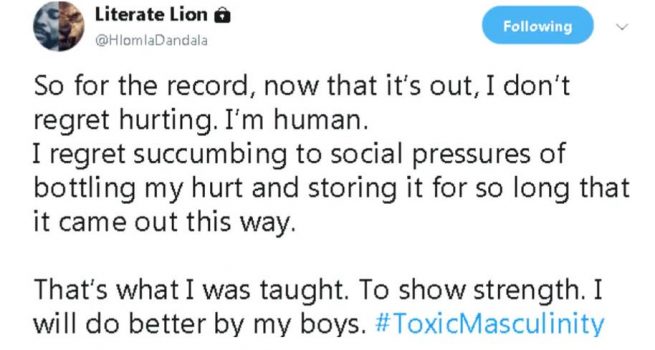 Hlomla had a special message for women mocking him after his heartbreak.

“It’s cute when trolls judge you based on tabloids that were disproved YEARS ago. But continue vomiting your hurts about men that hurt you on me.”

Meanwhile, neither Hlomla’s wife nor Chiskop have spoken publicly about his accusations.