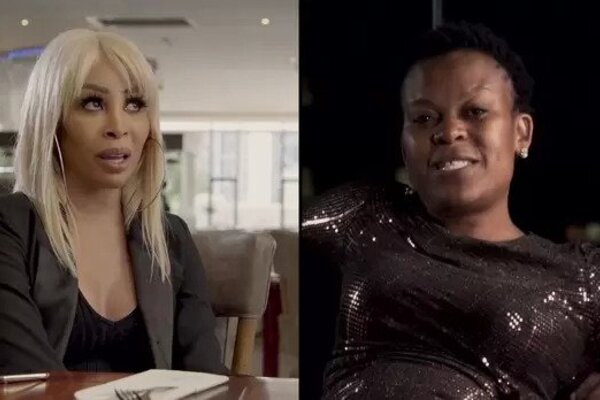 Zodwa Wabantu's reality show is probably one of the best shows we have on television right now.

The rawness of this show will either make you respect Zodwa or lose all of the little respect you had for her.

This past weekend's episode left us all gobsmacked, as Zodwa and Khanyi Mbau engaged in another woman to woman conversation.

The chat began after Mbau revealed to the whole nation that Zodwa was her ex-husband (Mandla Mthembu's) side chick at some point during their marriage.

But the real kicker was when Khanyi Mbau realised that Zodwa's son, who is more or less the same age as Mbau's daughter, could also possibly be Mandla's son as well.

Zodwa was honest by saying that she was not sure who the father of her son is, however, after Mbau requested to see a picture of Zodwa's son she quickly put two and two together and concluded that Zodwa's son could possibly be her daughter's sibling.

While looking at the picture, a teary Mbau mentioned that Zodwa's son resembled Mandla's other child from a previous relationship and this broke her heart as this could mean that her daughter has a sibling she does not know of.

What we loved about this episode is how genuine and honest the two ladies were towards each other, no cat-fight broke out between the two. It was purely a mature conversation between two women who are clearly not proud of their past.

If anything, Mbau was more shocked at Mandla's actions.

From watching the show we are not sure if Khanyi and Zodwa will agree in doing DNA tests that will confirm if their kids are indeed siblings, but Mbau's reaction from seeing Zodwa's son, it may be possible.

Their conversation ended in tears and a hug.

These are just some of the reactions from this past weekend's episode.

Wow, we can't wait for this week's episode.