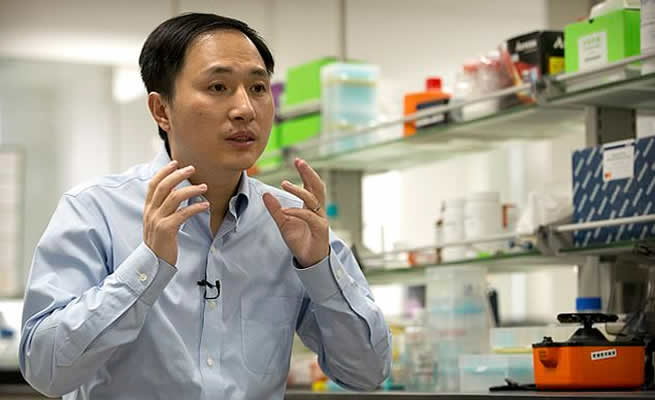 FORMER president Jacob Zuma’s boasting, in a tweet, about Mzansi having the largest HIV/Aids treatment programme in the world brought to mind the story of an alleged breakthrough by a Chinese scientist, He Jiankui.

First, Zuma wrote that more than 3,9 million people were on the supposedly life pro-longing antiretroviral (ARV) drugs as of August 2017. At the time, the number of Mzansi HIV-positive people was said to be at more than 7 million.

Now, Jiankui has apparently edited or modified the DNA of recently-born twin girls, Lulu and Nana, such that they are protected from contracting the Aids-causing HIV. Surely, that should be a feat worthy of a Nobel Peace Prize. But there’s a big problem.

Soon after revealing the results of his exploits in November, Jiankui allegedly received death threats and went missing in early December. The scientist has also been vilified.

The scientific community has accused him of ethical issues and experimenting on humans with a dangerous technology, a gene-editing tool called, CRISPR-Cas9. But this accusation assumes other sorts of accepted hi-tech products, like cars, aren’t dangerous.

Also, Jiankui might be facing possible corruption and bribery charges, which are punishable by death in China. The Chinese scientist appears to be truly some kind of a threat to business as usual, a problem to be neutralised or eliminated at all costs.

Come to think of it, what will happen to the profits of pharmaceutical companies producing ARVs and other medication fed to those said to be infected by the virus?

The 3,9 million people or the targeted more than 7 million South Africans living with Aids are simply a market, not humans, for pharmaceutical companies. Jiankui, just like former president Thabo Mbeki, is trying to mess with the wealth accumulation programme, camouflaged as fake care, of some multinational corporates.

In the name of health, many people are turned into addicts of chronic and other medication every day, so they become repeat customers.

Here’s the most revealing line from the Jiankui affair: there’s fear that changes made on the DNA of the babies could be passed on to their next generations. Since when is passing on good genes, especially those that could possibly protect against diseases like HIV/Aids, be a bad thing?

Perhaps, Jiankuii’s achievement presents an opportunity. Governments of the continent might want to request Chinese authorities to donate Jiankui to the Motherland instead of putting him to death.

Africa could do with such a maverick, especially since it has been reported that 70% of the global HIV market (totaling nearly 37 million) is in Africa.

Genetic editing of human embryos is illegal in the United States but not in China.

The researcher, He Jiankui, of the Southern University of Science and Technology of China in Shenzhen, has not published his research in a peer-reviewed journal, so it is not possible to verify his claims at this time.

At first, He experimented with editing the genes of mice, monkeys and human embryos in the laboratory, using the CRISPR-Cas9 method to edit a gene called CCR5. A small number of people are born with a defective CCR5 gene, meaning that they lack a functioning CCR5 coreceptor on the surface of immune cells. Most copies of HIV attach to this coreceptor to begin the process of infecting a cell; those who lack the CCR5 gene become naturally resistant to the virus.

The investigator ultimately engaged in a study heterosexual couples in which only the male partner was HIV positive. He washed the men’s sperm to isolate it from the semen and then placed one sperm into a single egg. Then he used the gene-editing system to disrupt one or both pairs of CCR5 genes in these embryos.

Sixteen of 22 embryos received such editing; 11 of these were used for six attempts to implant them into the uterus. Thus far, a pair of twins have been born out of these efforts, He says.

According to He, one of the twins had both CCR5 genes altered while the other twin had just one pair altered. The researcher says this did not lead to harms to other genes, a claim the other scientists have disputed as impossible to confirm based on the tests conducted thus far.

Such skeptics also point to evidence that He’s gene editing was incomplete in these twins, meaning that at least one of them was born with uneven changes across cells.

According to the AP, the Southern University of Science and Technology has stated that He’s research has “seriously violated academic ethics and standards,” and has planned an investigation of his efforts.