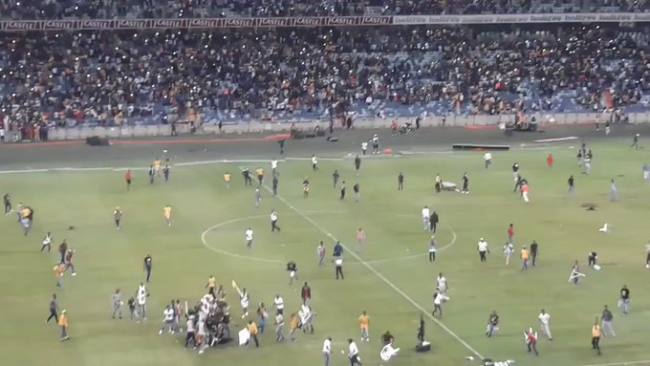 Two people have been arrested after violence broke out at the Moses Mabhida Stadium over the weekend during a Nedbank Cup semi-final tie.

Two men, aged 27 and 33, will appear in the Durban Magistrate's Court on Monday on charges of public violence and malicious damage to property, said Captain Nqobile Gwala.

She said more arrests were imminent.

On Saturday night, chaos erupted at the venue after angry fans invaded the pitch following Kaizer Chiefs' 2-0 loss to Free State Stars, dumping Chiefs out of the cup.

Fans could be seen storming the field, hurling chairs and beating security officials. One security guard was injured as a result of the scuffle with fans.

Police had to use teargas and stun grenades to disperse unruly fans.

Footage shows a female security guard being severely beaten by fans, leading to some on social media on Sunday speculating she may have died.

Police however could not confirm any deaths at the time of publication.

Marshall Security Sunday said the security official was not one of their employees.

"The term 'field marshall' is used for officials controlling access control to the pitch and is not related to Marshall Security who are not the contracted security provider to Moses Mabhida Stadium," a statement read.

"At this stage reports of a fatality are alleged however unconfirmed as no official media statement has been released by either MMS management or the South African Police Services.

"We ask that the public respect the rights of the injured and allow for official confirmation before posting unconfirmed reports on social media."