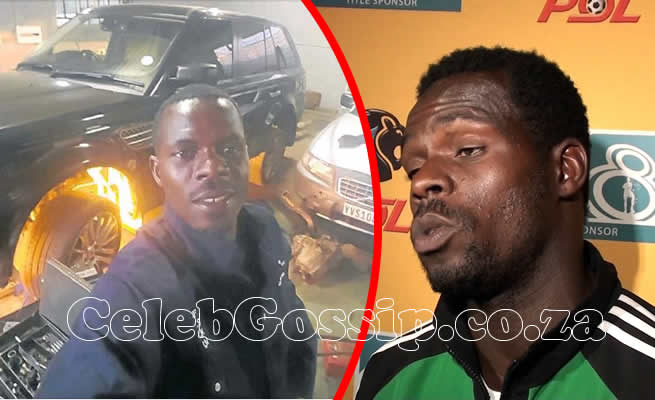 The manner in which Highlands Park captain Tapuwa Kapini ventured into the vehicle repair business is a true example of the old adage “when life gives you lemons, make lemonade”.

Kapini co-owns a workshop that fixes gearboxes in Pomona, Kempton Park. The Highlands skipper had no intention of getting into fixing gearboxes until his own Ford Ranger ruptured a gearbox some years ago.

His attempts to fix it hit a snag when the dealership slapped him with a R46 000 quotation, without knowing they were planting the seed for a business in the Zimbabwean shot-stopper’s mind. Kapini took matters into his own hands.

“My Ford Ranger had a had gearbox problem, when I took it to a Ford dealership they quoted me R46 000 to install a new one,” he recalled. “I could not afford that amount.

“I went to a friend of mine who had little knowledge of fixing cars. We took the gearbox out, thoroughly cleaned and examined it and put in some screws. That’s how I got into this business. Today, we co own Trec Gearbox Specialist business, and it is registered.”

The ex-Platinum Stars and AmaZulu keeper is planning to enhance his mechanic expertise by obtaining an analogous certificate in the near future.

“We have four employees. Most of the time I am in camp with the team and that’s when my partner Emmanuel steps up and does everything. We fix approximately five cars a day, depending on the parts [available]. If it’s cars like Toyotas, it’s easy,” Kapini stated.

The Lions of the North captain arrived in SA in 2007. He’s fluent in Zulu and Setswana. The 34-year-old goalie is not planning to retire any time soon. He spends his leisure time with his children.

CelebGossip.co.za can exclusively reveal that Kapini was originally a striker when he became a footballer. Becoming a goalkeeper was a total coincidence. Back in the day when he was still at school, in Zimbabwe, one of his team mates did not show up, and that team mate was the goalie. No one else could 'act' as a goalkeeper on the day until Tapuwa Kapini volunteered to give it a try.

Hard to believe as it may, Kapini proved to be the best goalkeeper the school had ever had, and since then he has become a shot stopper. This explains why he often participates in penalty shootouts and even free kicks in some matches and tournaments.