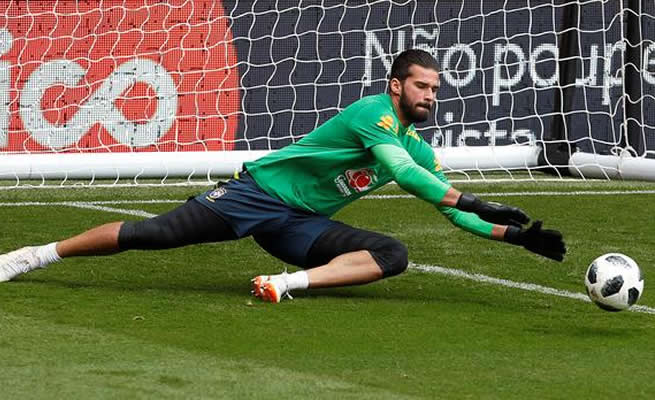 Liverpool have made a world record £62million bid for Roma’s No 1 Alisson in an attempt to end their goalkeeping troubles. Brazilian international Alisson has long been the man Liverpool manager Jurgen Klopp wants to replace Loris Karius.

Chelsea also covet him but Liverpool have moved first. The bid, according to sources in Italy, is £53m with a subsequent £9m in add-ons. Liverpool have a good relationship with AS Roma and registered their interest in the player in January. Their offer has dwarfed the current record for a No 1, which was set when Manchester City landed £35m Ederson – the 25-year-old’s compatriot – from Benfica last summer.

However, even £62m is unlikely to convince Roma’s canny sporting director Monchi to sell. Roma faced a financial squeeze earlier this summer, following their punishment for breach of financial fair play rules in 2015, but this was eased when they sold Radja Nainggolan to Inter Milan in June. Yet Klopp is desperate to replace Karius, who made two key mistakes in the Champions League final defeat by Real Madrid in May. And the German keeper has made a poor start to pre-season.

Meanwhile, Chelsea have been offered the chance to re-sign Petr Cech as they ready themselves for a Real Madrid raid for Thibaut Courtois. The Stamford Bridge club are also interested in Kasper Schmeichel and Gianluigi Donnarumma amid expectations that the Belgian will leave west London this summer.

Arsenal are open to selling Cech to provide manager Unai Emery with the funds needed to continue rebuilding his squad. Emery is still keen to sign Steven Nzonzi, who won the World Cup with France this summer. The manager worked with Nzonzi at Sevilla.

Cech, 36, has already turned down a move to Napoli to stay at the Emirates and fight for his place with new arrival Bernd Leno. Cech spent 11 seasons at Stamford Bridge, from 2005 to 2015, winning the Premier League four times and the Champions League. Real have made Courtois their primary goalkeeping target for the window.