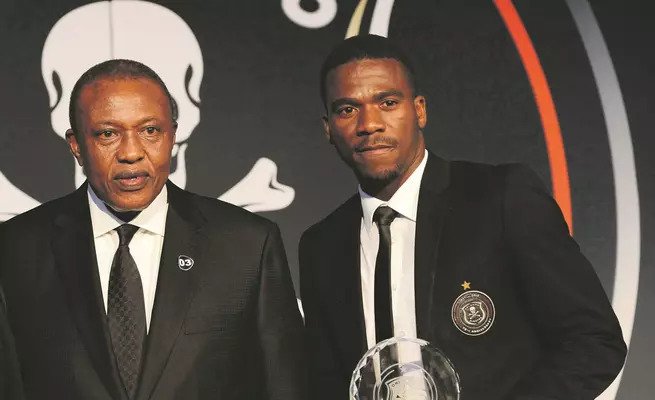 Orlando Pirates supremo Irvin Khoza this week weighed in on the ongoing case of the club’s slain captain Senzo Meyiwa.

Speaking for the first time since the trial of the five suspects accused of the murder began in the Pretoria High Court in April, Khoza said he could not deal with the confusion surrounding the case, which seeks to determine who killed the affable goalkeeper. Meyiwa was also the captain of Bafana Bafana at the time of his death in 2014.

“What we’re [being told] about what happened and this riddle that keeps unfolding are unfortunate,” he said.


“It’s [bewildering] to all of us. We don’t know what’s taken place to create this kind of confusion among the police, the Hawks, the witnesses, the neighbours and the people in the house. And I don’t think the boy deserved that kind of treatment, because he was a gentleman.”

Meyiwa was shot dead in October 2014 while at the family home of his girlfriend at the time, singer Kelly Khumalo, in Vosloorus, Ekurhuleni.

Khoza said he would not find peace until the culprit was brought to book.

He recalled the early days when he recruited the goalie as a teenager who served the Bucs from the junior ranks as a 13-year-old with distinction and went on to become a national hero.

“That’s why when I took him to his family, I told his father: ‘I’m happy to bring you your son, but I’m not happy because he’s lifeless. I took him as a 13-year-old boy and now I’m bringing him as a national asset. If this happened this way, it can’t be good.

Said Khoza:
So I hope they [the authorities] find a solution as soon as possible – that they find the culprit

“Then I’ll be at peace. We can’t be at peace over the boy who deserved better and who gave so much.”

Reminiscing over the life and times of Meyiwa at Pirates, Khoza recalled some of the traits that made the Bucs shotstopper one of the most respected figures at the Soweto powerhouse.

“The Iron Duke” – as Khoza is known in local football circles – added that Meyiwa had seldom been dismayed by his howlers that had cost the team in matches.

“His mood was unbelievable. He never had a long face when he wasn’t playing and in the shadows of Moeneeb Josephs.

“It’s as if God was saying He was going to recall this man. Meyiwa went to TP Mazembe and stopped two penalties. He wasn’t the kind of person to have a long face, be grumpy or complain. People were always attracted to him because he was a jolly fellow.

“He was one of the few players in the team who never had an agent.

“I always tell the players and staff in the office – in the transition programme – that when you’re still a star, you’re attracted to the people, but when you’re on your way down, you have to make yourself attractive to them. That’s where the challenge lies.”

The case begins again on July 11 for submissions by defence Advocate Malesela Teffo.

The court will also consider the contents of a second docket, which was referred to during the cross-examination of the first state witness and police forensic expert, Thabo Mosia.