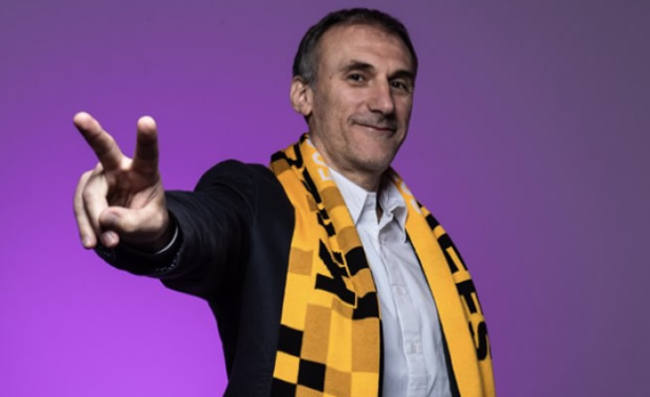 Giovanni Solinas was unveiled by Kaizer Chiefs as their new head coach today, with the Italian penning a deal until 2020 with the Amakhosi.

The Glamour Boys have been on the hunt for a new head coach for some time now following Steve Komphela’s resignation back in January, and after weeks of speculation, they have now confirmed the man who will lead them forward.

Very few words were shared by Motaung, apart from welcoming the new coach to the club after much anticipation from the supporters, with the Italian merely reciting the club's famous slogan, "Amakhosi for Life", before the coverage ended.

Solinas, 50, had two spells with Free State Stars before a stint in Saudia Arabia most recently, and Chiefs’ chairman, Kaizer Motaung, has voiced his hope that the Italian will be a success at Naturena.

With the club confirming a two-year deal with an option for a further year, Motaung told the club’s official website, “We always look at what a coach can do and we believe that with Solinas we have brought in a person with the right mechanism and energy to do well. We also looked at recruiting a coach who understands our league, and somebody who can help us do well on the African continent, as we will be participating in the Confederations Cup. It’s important to understand that the game of football has become very scientific, which means that the strength of the coach is the technical team around him, even though he will, of course, always be the one in charge. We feel that Solinas is the right guy to guide this process.”

CelebGossip.co.za has since learnt that the former Free State Stars tactician has penned a two-year deal with an option of a further year.

However, Solinas will be under pressure to hit the ground running and try to win the Amakhosi faithful over by delivering a trophy in his first season at the helm, given the club's historic three-year barren run under Komphela.

Giovanni Solinas knows that he’s taken on a big job at Kaizer Chiefs, saying he’ll ‘work hard day and night’ to try and bring success back to Naturena.

With pre-season already underway, it remains to be seen when – or if – Solinas will make the trip out to Potchefstroom to join his new players, although the club says that they’re waiting on him to receive his work permit.

Now, with a new chapter in his career on the horizon, the Italian has spoken about his move, discussing how big Chiefs are as a football club. He told the club’s official website, “It’s a big opportunity as Kaizer Chiefs are a big club, not only in South Africa but also on the African continent. Coaching a club of this magnitude comes with a big responsibility. I will work hard day and night to make the Kaizer Chiefs Family and the supporters happy.”

Solinas had two spells in South Africa prior to joining Chiefs, both with Ea Lla Koto.

Chiefs will be making their first public appearance since May 12 when they participate in the Bokone Bophirima Maize Cup on Saturday, but it is unlikely that the new coach will be taking charge.

Assistant coach Patrick Mabedi is set to continue his caretaker role in the interim, having led the team through the first three weeks of their pre-season preparations.