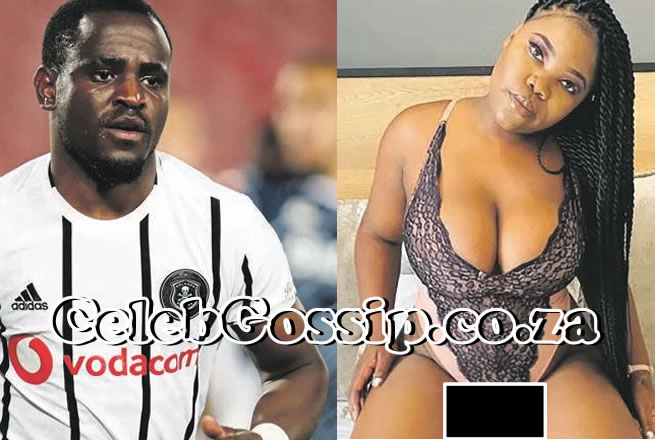 This after Orlando Pirates star Gabadinho Mhango drove over her foot.

According to Wandi, The two had a great time at Propaganda Club in Tshwane on Saturday, 18 September until the club closed at 10pm, they decided to go to another location to continue the party.

“We were travelling in two cars and ours was driven by Gabadinho.

“I got out to get some fresh air and as I tried to get back in, Gabadinho drove over my foot. I screamed in pain but he wouldn’t stop the car,” she claimed

She said Gabadinho allegedly refused to take her to the hospital because it was after curfew.

“I was in pain and I started shouting at him. I told him to leave me at the garage so I could go to a nearby hospital, but he refused. Eventually, he dropped me off somewhere and I got a taxi home to Katlehong in Ekurhuleni,” she said.

Wandi's friend claimed: “We were partying with Gabadinho at a club. But we decided to go to a private place in Sandton, where we were going to party more without curfew restrictions.

“We stopped for fuel first. This is where her foot got injured. There was a fight among ourselves because Wandi was no longer willing to go to Sandton, she wanted to be taken back home.

“We left her at another garage because she was in pain and fighting with us. We then drove off with Gabadinho,” said the friend.

The next morning, she tried to open a case, but cops allegedly told her she’d have to do it in Tshwane.

“I realised it would cost too much and take too long to travel back and forth, so I decided not to open a case but I believe God will punish him for me,” she said.

Gabadinho denied that he drove over her.

He said he drove straight home from the club and his friend, Kevin Banda, agreed to drive her and her friends home.

“As he was driving them home, they stopped at a garage and that was when Wandi was injured. I was about to get home when Kevin phoned me. At the time, she was insulting everyone in the car.

“I only went back to calm the situation and I decided to drive her and her friends back home,” he said.

Gabadinho said she was only trying to harm his reputation.

“I think she’s desperate for money and she was trying to trap me,” he said.

Orlando Pirates administrator Floyd Mbele said he was not aware of the incident and could not comment.

“We can only start acting when a complaint is lodged and we get both versions of the story,” he said.