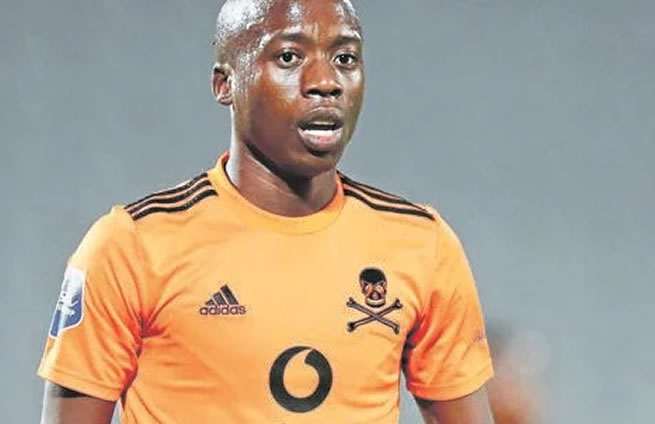 Orlando Pirates player Ben Motshwari is in hot water for allegedly assaulting his girlfriend at a tavern.

Today, the star handed himself over to the cops, briefly appeared in court and the case was taken off the roll pending further investigation.

However, his fans will not see him on the pitch for a while.

This is because the star midfielder was suspended by his club as he is facing a serious charge.

According to a source, Motshwari’s girlfriend visited him at his home on Sunday, 19 September, but he decided to leave her with friends.

“He left for a long time and his girlfriend decided to look for him,” said the source, who asked not to be named.

The source said the girlfriend found Motshwari sitting with a girl in another house.

“She got angry and took Ben’s car. He followed her, wanting his car back, but she refused,” said the source.

“She then went to a tavern in Mohlakeng in the West Rand with her friends. They were chilling and having fun when Ben arrived and started hitting her,” the source claimed, adding Ben kept hitting his girlfriend until he was stopped by two other people.

“She sustained injuries. I hope she heals soon,” the source said.

The tavern owner said he wasn’t sure what happened.

He said Motshwari was a regular at his tavern.

“He’s a cool guy. He normally comes, greets and chills. I really don’t know what happened that day

“I did not see the fight. I only heard about it,” said the owner.

The girlfriend opened a case at Randfontein Police Station.

Police spokesman Captain Mavela Masondo said the suspect handed himself to the police and appeared in court.

“The matter was taken off the roll pending investigations,” said Masondo.

When our news crew contacted Motshwari, he said he would ask his team whether he could take interviews or not.

“I’ve been with this woman for a long time. I don’t know why she’s dragging my name like this. What she is saying it’s a lie. That’s not what happened,” he claimed.

He said he would one day tell his side of the story.

“One thing I can tell you is that I’m not a violent person. I’ve never fought with anyone in my life, whether a guy or a girl. Why would I start today and ruin my career?

Ben said this was breaking his heart as people were writing all sort of things without hearing his side of the story.

“This is the sad thing about us black people. We always want to destroy another black person,” he said.

Meanwhile, Pirates has suspended the star.

In a statement, Pirates confirmed that the player has been charged by the police.

“Orlando Pirates Football Club can confirm that it has suspended midfielder Ben Motshwari after being charged by the police. Mr Motshwari will remain suspended pending an investigation. The matter is subject to a legal process, and the club is, therefore, unable to make further comments until that process is complete,” said the club.