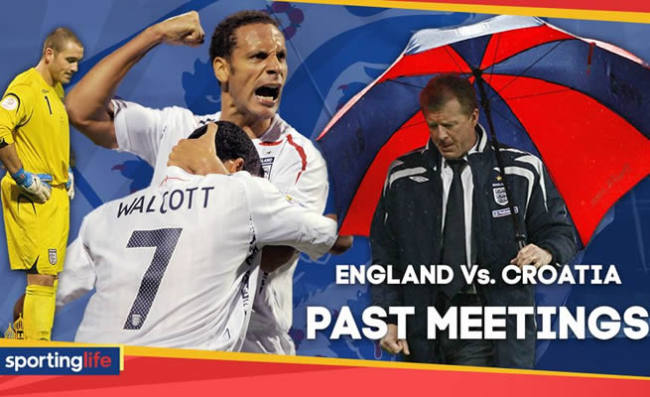 At the start of the World Cup, a very complex and fancy prediction model didn’t give Croatia much of a chance of making it this far. Fair perhaps, if you consider that since making their bow at the tournament back in 1998, they’ve only progressed past the group stage once.

But statistical models do not account for individual brilliance and, in Luka Modric, Croatia have one of the most brilliant players on the planet.

But as we’ve learned with Cristiano Ronaldo and others, one player can’t always carry a team with talent alone. Yet when that player is also an astute manager of people, things change. Modric is exactly that.

Jermaine Jenas, who played alongside Modric at Tottenham, shared some fascinating insight about him in a column for the BBC in the lead up to the semi-final.

He wrote: “In training he was exactly the same as he was in games – intense and relaxed at the same time. He was forever complaining about refereeing decisions and arguing with his team-mates, but also urging us on and celebrating any kind of victory.

“Whether it was a two-touch game, a possession-based drill, five-a-side or eight-a-side, he loved winning. His mindset is win, win, win.”

Modric pairs this marshalling of troops with orchestrating the midfield in ways few people expect. Those who underestimate his pace and power, meanwhile, do so at their peril.

But Croatia are also knackered. They’ve had to go through two knockout games with extra time and penalties. While they won both in varying degrees of awfulness, the stress extended matches puts on players, mentally and physically, is tremendous.

And so, England must believe that they have a chance to rewrite history. They’ve already done so once by surviving a penalty shootout of their own, all thanks to meticulous preparation under Gareth Southgate’s tutelage.

The waistcoat-wearing boss is probably the last manager in the world anyone would have expected to take England to the semi-finals of this tournament. His coaching record isn’t exactly illustrious or lengthy.

At Middlesbrough, he arrived and left under controversial circumstances. He was appointed despite not having his UEFA Pro Licence and was fired in spite of taking Boro to fourth in the Championship, the second tier of English football.

With the England youth team, the Young Lions were knocked out in the group stage of the Junior Euros, finishing stone-dead last.

Yet here we are. He has somehow helped the team exorcise demons which he himself has previously succumbed to – and fostered a culture where those at the top of their game can excel without an overwhelming fear of failure.

Croatia will have to go through the motions without the services of right-back Sime Vrsaljko, who is out through injury. Goalkeeper Danijel Subasic, who looked like his hamstring might kill him against Russia, is also on the watch list. England have a full contingent to pick from.

Previous meetings, head-to-head and other stats

There haven’t been many games between these two. England have won four, drawn one and lost two. They’ve met just once at a major tournament, when England won 4-2 in a group stage match at Euro 2004.

The pair have, however, met once before when England were under pressure. Back in 2007, Croatia beat them 3-2 at Wembley when the Croats had already secured their qualification for the 2008 Euros. A win would have seen England through, too.

Instead, it became known as the infamous “Wally with the brolly” match where coach Steve McClaren, sheltering from the pouring rain underneath an umbrella, became cheap fodder for the tabloids. Modric and Ivan Rakitic were both part of that squad.

Three of the four goals Croatia have conceded in Russia have been from set-pieces. Good news for England, who have scored set-piece goals by the truckload at this tournament. Eight in total have come from set plays.

But their current haul of 11 goals has equalled their highest total at a World Cup set in 1966, when they were champions.

And things are on the up for England. They’ve tasted defeat in just two competitive matches since the two games they lost at the previous World Cup.

History suggests this is set up for England to go peak England and balls up in a fantastically creative way. But current form suggests that this will be a bridge too far for Croatia.