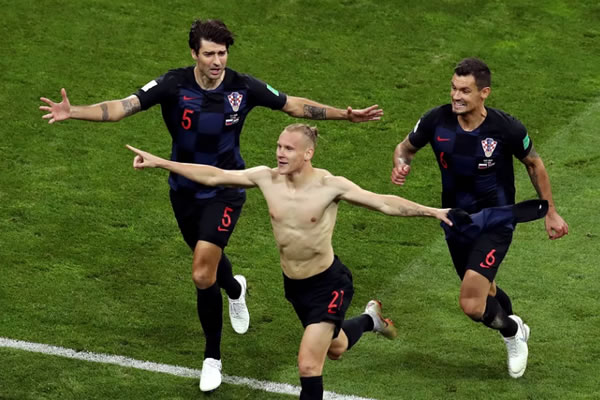 Vida scored an extra-time goal and one of Croatia's penalties in a 4-3 shootout win over the World Cup hosts in Sochi on Saturday.

This isn't going to go down well with Russian fans. After #RUSCRO, Ognjen Vukojević and Domagoj Vida celebrate with a "Slava Ukrayini" video message and dedicate the victory to Ukraine. pic.twitter.com/UePKTdbFVJ

Croatia will play England in the semi-final on Wednesday and some Russian officials are calling on FIFA to take the toughest measures possible against the Balkan country.

The ponytailed 29-year-old shouted "Glory to Ukraine!" in a video posted by former Croatia international Ognjen Vukojevic shortly after the match.

The two both spent parts of their careers playing for Ukraine's Dynamo Kyiv.

"FIFA is processing the different reports of the said match as well as potential evidence concerning the matter referred to in your message," a FIFA spokesperson told AFP.

"Until we have evaluated all information available, we cannot comment further."

Vida later told Russian media that he meant no offence.

"It love Russian people," Vida was quoted as saying. "It was just a joke."

"Glory to Ukraine!" was a slogan of the former Soviet republic's pro-EU revolution that toppled a Russian-backed president in 2014.

The revolt was condemned as illegal by Moscow and sparked a crisis in relations between the two neighbouring states.

It was followed by Russia's annexation of Ukraine's Crimea peninsula and a pro-Kremlin separatist war in eastern Ukraine that has claimed more than 10,000 lives.

Vukojevic added in the video: "This victory is for Dynamo (Kyiv) and for Ukraine! Croatia onwards!"

The clip was picked up by Russian state media and drew condemnation from some officials.

"Political, nationalist and racist slogans are not welcome at the World Cup."