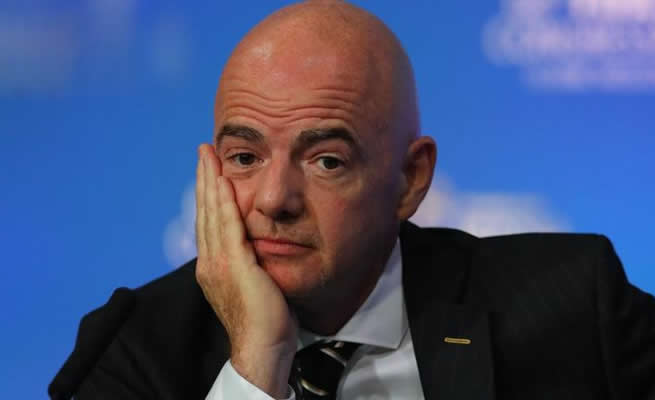 Fifa president Gianni Infantino has expressed his dismay that Africa failed to secure a place in the 2018 World Cup knock-out stages.

"Of course," Infantino replied when asked if he was saddened by Africa's early exit. The World Cup is for the whole world and the African teams were very, very close at the end. An Asian (team) made it – an African not – but I think they will be ready soon for the next one," he told BBC Sport.

Nigeria and Senegal both had hopes going into their final games but the Super Eagles missed out after conceding a late goal to Argentina while the Teranga Lions failed after losing narrowly to Colombia.

Africa was the only continent represented at the finals that failed to make the Round of 16.

It is the first time it has failed to reach the second round since 1982, when Cameroon went unbeaten and Algeria were denied progress when group rivals West German and Austria contrived a result that eliminated them.

That game became known as the 'Disgrace of Gijon' and a similar scenario – played out by Japan and Poland in Volgograd last Thursday – resulted in Senegal's elimination in Russia.

The West Africans became the first team to exit the World Cup for their disciplinary record as they came third in Group H behind Japan, with whom they had finished level on points, goal difference and goals scored.

But they failed to qualify after Fifa introduced a rule for this World Cup whereby teams that had identical records would be separated by their on-field discipline.

Realising the situation, Japan made no attempt to score against Poland, despite trailing 1-0, on 28 June after realising they could progress from Group H should they concede no further cards nor goals.

The finale to the game in Volgograd was described by commentators as "an absolute farce".

The Senegalese Football Federation wrote a letter of complaint to Fifa, saying teams should be punished for playing in a way which it says went against the principles of football.

"We count on fair play always – for everyone," said Infantino.

"As (for) the rules, you always learn. You always have a debrief after and see what you can do better," he added, confirming that the ruling will be reviewed after the tournament.

"As things stand, we do not see any need to change it," Fifa director of competitions Colin Smith said last week.

Infantino went on to describe games at the World Cup as "crazy" and Russia 2018 as a "great" tournament.

The World Cup has reached the quarter-final stage with several shocks, such as the early eliminations of defending champions Germany, 2010 winner Spain and European champions Portugal, and plenty of drama.

"So far, (it's) a great World Cup (with) incredible games, a lot of passion and a lot of people celebrating," he said.

The 48-year-old also believes the introduction of VAR technology is progressing smoothly at the tournament.

"I think it is working pretty well. We have had a very, very positive outcome so far so we have to continue to keep the level high," added the Swiss-Italian.

The World Cup, whose quarter-final stage begins on Friday, will end on 15 July when the Russian capital Moscow hosts the final.