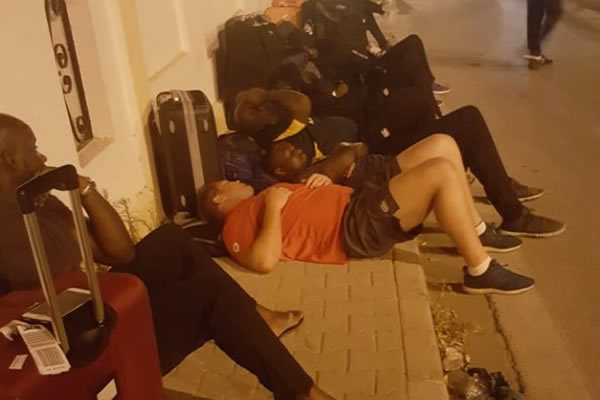 The Tunisian Rugby Union (TRU) has accused Zimbabwe’s rugby team of “unethical actions” after their players slept on the street outside of their hotel in Beja on Monday in protest at their perceived poor condition of the accommodation.

Zimbabwe are in Tunisia for a Gold Cup clash on Saturday that serves as a qualifier for next year’s Rugby World Cup in Japan, but the team made global headlines after images on social media of their players sleeping on the curb went viral.

The TRU said the Zimbabwe delegation “started complaining as soon as they arrived” in the capital Tunis, refusing to pay entry visas at the airport as they did not have sufficient funds, which led to a delay of four hours at the airport.

“We had to contact (the) CEO of Rugby Africa who spoke on the phone with the head of the delegation of Zimbabwe who subsequently agreed to pay the invoice of the visa fees,” the TRU said in a statement.

The team transferred to Beja, but hours after checking in vacated their rooms and decided to sleep on the street outside in protest at what they perceived to be poor conditions.

“Around 2300, the head of the Zimbabwean delegation expressed reservations about the state of the bathroom in one of the rooms, the lack of a swimming pool and the low internet speed,” the statement added.

“So, he started talking about leaving the hotel on the pretext that it is not decent enough for his team.

“He asked all the members of the delegation to take out their luggage, leave the hotel and spend the night outside on the ground. Local officials tried to talk and negotiate with the head of the delegation but remained unsuccessful.”

The team transferred to a nearby hotel in Nefza the following morning and accepted an apology from the TRU, although the Tunisian authorities said they felt the protest was unjustified.

“The Tunisian Rugby Union expresses its deep regret for this unfortunate event and strongly deplores the anti-sports and unethical actions of the Zimbabwean delegation which do not reflect the strong ties of friendship between the two countries,” the statement concluded.

Namibia currently head the Gold Cup standings with a maximum 15 points from three matches, including a 118-0 victory over Tunisia.

Zimbabwe have a draw and a defeat from their two matches.

Only the top team advances automatically to the World Cup, with the second-placed side entering the repechage tournament.

I guess it's gonna be an interesting showdown on Saturday then