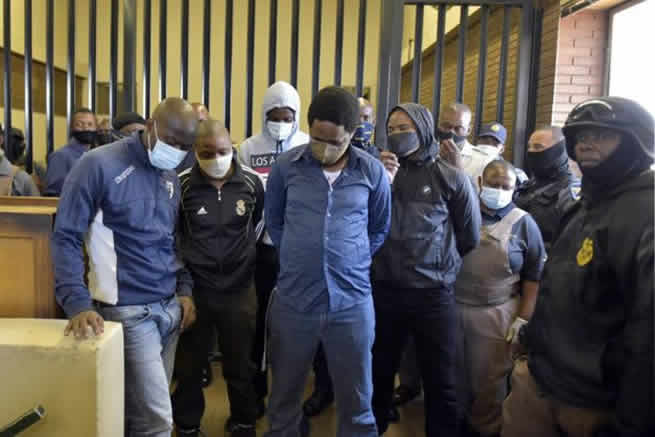 The arrests were made on 26 October, which was six years to the day since Meyiwa was shot and killed at the Vosloorus home of his girlfriend, actress and musician Kelly Khumalo.

The five men accused of being involved in the murder of former Bafana Bafana goalkeeper Senzo Meyiwa will appear in the Boksburg Magistrate’s Court on Friday.

They first appeared in court last month after Police Minister Bheki Cele announced a breakthrough in the protracted cold case.

The arrests were made on 26 October, which was six years to the day since Meyiwa was shot and killed at the Vosloorus home of his girlfriend, actress and musician Kelly Khumalo.

According to court documents, it is believed that, while Meyiwa was at Khumalo’s home on the day, at around 20:00, two people barged in with a firearm and a knife, and demanded money and cellphones from the victims.

At the time of the incident, also present were Khumalo’s mother, Gladness, Longwe Thwala, who was Zandile Khumalo’s boyfriend, Meyiwa’s friend, Tumelo Madlala, as well as Mthokozisi Thwala.

A scuffle ensued and Meyiwa was shot in the chest.

He was declared dead on arrival at Botshelong healthcare facility.

The five accused’s first appearance before magistrate Hans Havenga was quite an occasion when four – Sibiya, Mncube, Maphisa and Ntuli – appeared without any legal representation, saying they saw no need for a lawyer because they knew nothing about the case.

The men, who are currently serving time for other crimes, maintained they were wrongfully implicated.

According to the indictment, they are from KwaZulu-Natal, Gauteng and North West.

The matter was postponed to Friday for the State to submit a final submission for the matter to be moved to the Gauteng High Court in Johannesburg.

A leaked document during the last appearance also revealed that the cellphone records of Kelly Khumalo may be obtained as part of the investigation.

The document had formed part of communication among investigating officers and stated that cellphone communication between the various accused before, during or after the crime must be established along with tower locations.

Khumalo’s lawyer, Magdalene Moonsamy, said she had not been formally charged or implicated in the matter.

“We wish to place it on record that our client is not implicated nor charged in this matter and is, therefore, not a suspect,” the lawyer said in a statement.

Moonsamy said they had noted the leaked document and that it was done with malicious intent.