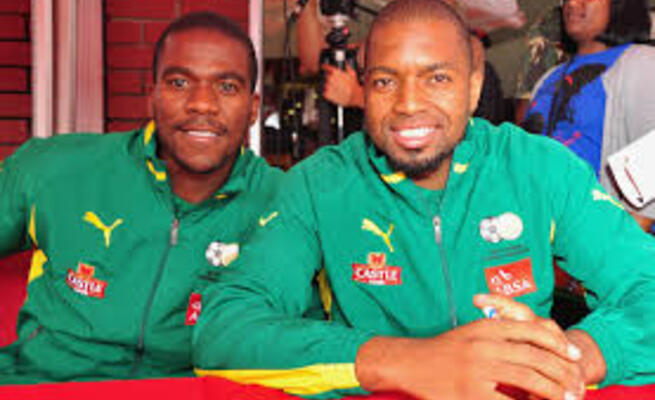 Itumeleng Khune yesterday spoke about his friendship and rivalry with the late Senzo Meyiwa‚ and the dreams they had as youngsters.

The national goalkeeper was addressing a gathering at the tombstone unveiling at Meyiwa’s grave in Chesterville‚ Durban, yesterday.

Kaizer Chiefs star Khune referred to the intense rivalry from their time in junior national teams up to their rise to be No 1 keepers for the biggest rivals of SA football, Chiefs and Orlando Pirates

Meyiwa was Bafana Bafana captain at the time he was murdered in Vosloorus on October 26 2014, a stint Khune also enjoyed in the national team.

Khune said at another ceremony at Moses Mabhida Stadium. ”… I think when we first met we were 15 years old and we were like‚ ‘ We want to take over as national team goalkeepers’. We alsowanted to be in the [Soweto] derby‚ the match between Chiefs and Pirates – one of the greatest derbies.

“So we pushed each other from the under-17s. … we were playing at an inter-provincial tournament in Polokwane … when Senzo and I were chosen to represent Gauteng.

The coach was confused about who to play as his No1. … If he had means he could have taken half myself and half of Senzo and made them as one. And yes‚ it wasn’t possible‚ but we managed to play three games each and we performed well and had clean sheets.

“We went all the way to win the goalkeeper of the tournament. We were also called into national U17 team and when we arrived there we also gave the coach stress about who he was going to make No1.

“So, that’s how our friendship‚ our rivalry and the competition started. From the U17s we went to the U20s and also to the U23s.”

Khune said this continued as he and Meyiwa progressed to senior level.

Just before his death, Meyiwa established himself as Bafana No.1 under Shakes Mashaba with some storming performances in the qualifiers as SA reached the 2015 Africa Cup ofNations finals at the expense of nemesis Nigeria.

We ’ ll always remember you Senzo – rest in peace for us and I hope we get justice very soon. ”

Safa president Danny Jordaan told the gathering that the five arrests made last month hold promise of bringing to an end the protracted saga of the investigation into the beloved keeper’s death.

And now we can say at least it seems that we can unveil the tombstone of Senzo today.”

Bafana coach Molefi Ntseki and some players in the squad for Friday’s 2021Africa Cup of Nations qualifier against Sao Tome and Principe attended the ceremony.