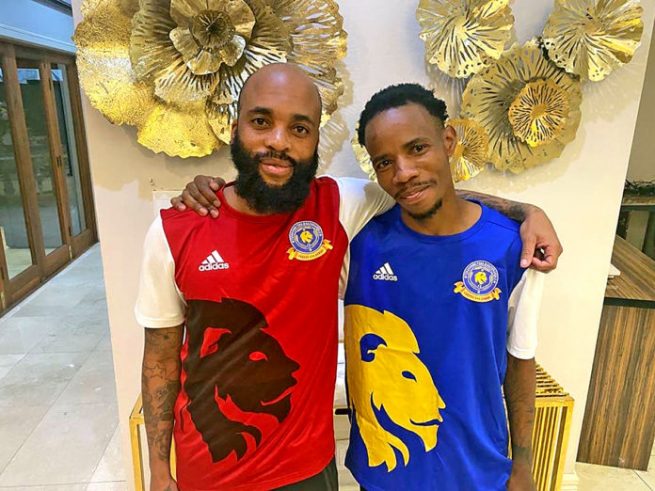 Out of sorts PSL newbies Tshakhuma Tsha Madzivhandila (TTM) are on the verge of firing another big name player, Joseph “Tight” Molangoane after he allegedly refused to wash his own kit.

The former Kaizer Chiefs midfielder is likely to suffer the same fate as his friend and former Orlando Pirates superstar Oupa Manyisa.

According to informants, part of the reason why Molangoane will be shown the door is because the Limpopo based club is struggling financially and they are regretting agreeing to pay the big salaries for Molangoane and Manyisa.

Molangoane is deemed as a bad apple after he refused to wash his kit. And this apparently did not go well down with the club bosses.

The two players were not paid their salaries for September and October (since they were signed), according to our well placed insiders.

“The club is not doing well financially and signing those big salaries for Joseph and Oupa was a big miscalculation. The club saying Molangoane is a bad apple is just a way to get rid of him because they are finding it difficult to honour their contracts,” said the tipster.

“How do you expect players to wash their own kit, this is not acceptable. Tight has not played a single game since the season started. He was told that he must sign a termination of his contract, and only then he will get his September and October sal- aries. They informed him that he was not registered with the PSL and because of that, his con- tract was null and void,” added the informant.

Approached for comment, Molangoane and Manyisa’s business manager, Tshepo Mabona, said he only wanted what was due to his players.

“Our players are contracted to TTM. The club says that they are sorting out a few things and will resolve the matter,” Mabona said.

“It will be difficult for Molangoane and Oupa to find teams in the PSL because they are still contracted to TTM. I cannot com- ment on other allegations.”

Manyisa is back in Johannesburg and is training alone to keep fit.

Another player, Gustavo Paez was dropped by the team with- out kicking a ball after he left his club in Venezuela.

Paez is likely to be snapped up by the ambitious AmaZulu. Although Moroka Swallows have denied it, Manyisa has been linked with a move to the Beautiful Birds’ nest.

In July, flamboyant TTM boss Masala Mulaudzi announced that they had captured the two players, who signed two year deals. The move was hailed as a masterstroke that was was going to beef up the club on the pitch and even attract more supporters to their matches.

Manyisa was the first to be ousted without kicking a ball.

This week, Paez followed suit and he left the club after he claimed he was told to leave via WhatsApp. Well placed insiders have revealed that the Venda club is finalising Molangoane’s departure, also without him having kicked a ball.

TTM are sitting in 11th position on the PSL table after two draws in their opening matches against TS Galaxy and Mamelo- di Sundowns.

Efforts to reach club bosses Sello Chokoe and Mulaudzi to comment on the allegations drew a blank after their cellphones rang unanswered.