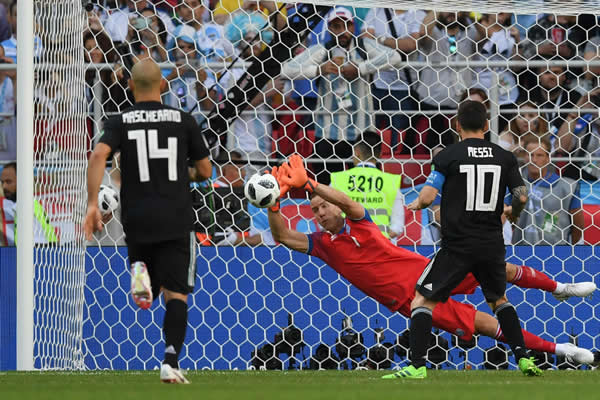 Jorge Sampaoli came to Lionel Messi’s defence after the Argentina star missed a penalty in their shock 1-1 World Cup draw with Iceland.

The creative burden fell on the best player of the modern era once again as Sampaoli’s side struggled to break down their well-organised and disciplined opponents in Moscow.

After Sergio Aguero’s opening goal had been quickly cancelled out by Alfred Finnbogason, Messi was handed the chance to restore Argentina’s lead with a 64th-minute penalty.


However, the Barcelona forward saw his effort saved low down to the left by Iceland’s goalkeeper, man-of-the-match Hannes Halldorsson.

Having spent most of the afternoon attempting to play in team-mates, Messi then attempted to win the match himself, peppering Iceland’s goal with efforts but to no avail.

Sampaoli stood by Messi after the miss when asked to sum up his star’s performance.

“To evaluate and characterise [Messi's] work is difficult because it was an uncomfortable match,” he said.

“Iceland was playing very defensively, blocking all possible spaces but we did everything we could for Argentina to win, above and beyond analysing the performance of every single player.

"I know Leo is very much committed to Argentina moving forward."

Sampaoli felt Iceland’s defensive set-up made it difficult for his players, but admitted that Argentina will need to devise alternative game plans if facing such an opponent in the future.

“We tried to work better and create more opportunities, but what can you do? We're just starting. We will learn from this experience.