Home Sports Manchester United's Transfer News: Full list of who is leaving and who... 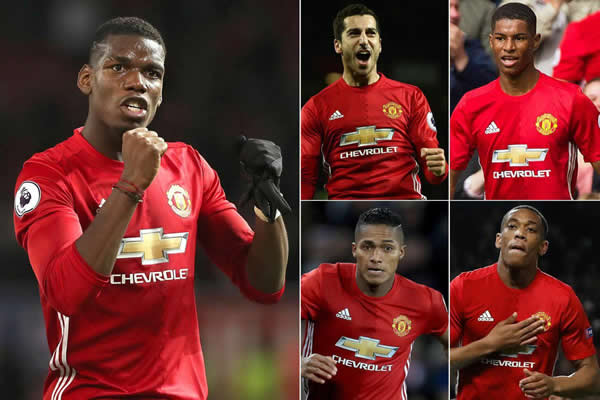 There are few things certain in this world. One thing we can be sure of is José Mourinho will have a busy summer. He’s already made a couple of transfers and these will certainly not be his last. Manchester United will look quite different next season.

José got the summer started off with two level-headed transfers- Fred and Diogo Dalot. Fred will serve as a capable defensive midfielder and Dalot will hopefully blossom under Mourinho’s tutelage. With this new blood coming to United, some other players will no doubt have to say their goodbyes.

There is a consensus in the football community about some of these players leaving (one in particular.) However, there could be some surprising decisions made by Mourinho. Certain Red Devils haven’t been living up to expectations that were set before them. Others do not get along with the manager.

There are many things that can indicate a player is getting the boot. At this point, the best we can do is guess, which is exactly what the writer will try to do. While the players themselves have a great influence on whether they stay or not, the biggest factor is Mourinho himself.

GOALKEEPERS
David De Gea: Stay
David de Gea is Man U’s best player and is one of the greatest goalkeepers in the world. Perhaps Mourinho’s biggest job this offseason is to keep the Spaniard since he contributed 19 clean sheets this year. Fortunately for United, de Gea is “happy” where he is so he likely won’t be going anywhere.

Still, it is possible de Gea will be on his way out if Mourinho can sign another keeper of his caliber. We’ll have to keep a close eye in coming days.

Sergio Romero: Leave
While de Gea is at the peak of his game, Romero is not. He played in only one game this year which is less than most backup keepers. He has also expressed interest in returning to Argentina to finish his career.

United won’t really miss him either as they have a promising young goalkeeper in Joel Pereira. There is a chance, however, that Pereira leaves instead of Romero.

FULLBACKS
Antonio Valencia: Stay
The Ecuadorian workhorse is United’s best defender and was a huge factor in their defensive domination. Don’t believe me? Valencia missed seven games this year mostly due to injury. Even so, he played in 16 of the 19 games where United came away with a clean sheet.

While he is 32 years old, he still has plenty to give to his team. Diogo Dalot’s arrival has been seen as a danger to Valencia’s starting position. However, Mourinho has shown that he allows youngsters to develop at their pace and prefers more experienced players.

Ashley Young: Stay
Young has shown himself to be a reliable wing-back for United. Even though he didn’t start the first four games of the season, he soon became a fixture in the lineup. Apart from his defensive excellence, Young contributed six assists this year. That’s as many as César Azpilicueta and Kyle Walker. Good company, indeed.

CENTREBACKS
Phil Jones: Leave
Poor Phil Jones. It wasn’t his fault that he was left one-on-one against Hazard in the FA Cup Final. Still, since he gave away the penalty he will have a huge target on his back this offseason. While Mourinho doesn’t have any problems holding on to several players, it seems he won’t prefer to keep Jones. In the last 11 games of the season, Jones played in only three of them. It’s obvious that Mourinho does not have as much confidence in him as Southgate does.

Chris Smalling: Stay
He may not be an absolute fan favorite, but Mourinho seems to like him. Like Ashley Young, Smalling didn’t start the first several games of the season. Once he did get the start, he was there to stay. The centreback slot is certainly a problem area for United but it seems Smalling just needs a decent partner in the backfield. This could lead to some more interesting moves this summer.

MIDFIELDERS
Paul Pogba: Stay
Paul Pogba has not had a fantastic career at Manchester United. He has been a shell of his old self-compared to what he was at Juventus. This is true even though he recently compared himself to Messi. Still, this past season we have seen flashes of the real Pogba in games where he has been placed correctly. Mourinho will likely keep him on board since Pogba plays his kind of football- physical and brash. Also, Mourinho doesn’t seem to have sold any expensive players lately. If he did transfer Pogba, it would go against all common sense.

Marouane Fellaini: Leave
This is almost set in stone. If Fellaini left United it would be good for all involved. Fellaini doesn’t get much playing time and he could certainly be a starter in other teams. Some of the clubs being talked about are Arsenal, PSG, and AC Milan.

Alexis Sanchez: Stay
As with Pogba, Mourinho will certainly give Sanchez plenty of time to adapt to his new surroundings. This is the case even though he had a lukewarm start for United by scoring just two goals for the team. His assist numbers were much more promising at five. Chile’s best player will be a great help behind United’s front three in the 2018/2019 season.

FORWARDS
Anthony Martial: Leave
Even though Martial missed out on the World Cup, many teams are interested in him. He may go to Ligue 1 but Tottenham has been closely linked with the Frenchman lately. Martial himself is likely wanting to leave since he was a benchwarmer for much of last season. At 22 years of age, Martial is entering the best years of his career. According to Transfermarkt, he is valued at an extremely profitable €65 million. All of this means that if a transfer does happen; United, Martial, and Martial’s new team will all come out ahead.

Jesse Lingard: Stay
Lingard had a fantastic season. While he wasn’t a starter for many games, he was an influential part of the Red Devil attack. This year he racked up eight goals and six assists and looks to only be getting better. In fact, since he’s been selected for the England national team he’s been drawing many comparisons to the skilled Deli Alli.

Reserves
Daley Blind: Leave
In the whole of the 2017/2018 season, Blind only played in six games. It is obvious that he isn’t one of Mourinho’s favorite defenders. Inter Milan did show strong interest in signing the Dutchman, but Inter decided they did not want him. He is sure to go if a team really seeking his services goes after him.

Luke Shaw: Stay
No that isn’t a typo. It is true that for some reason Mourinho really doesn’t like Shaw. Still, recent developments indicate Shaw is here to stay. United have been pursuing Alex Sandro lately but according to the Independent this interest has cooled off. This would indicate that Shaw is sticking around, even if he stays a backup.