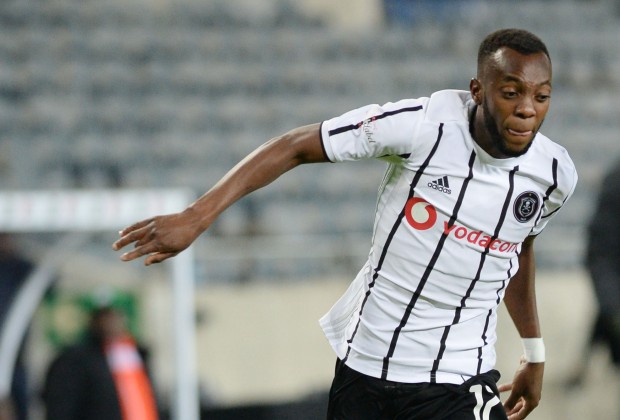 Orlando Pirates top striker Justin Shonga is in trouble with the law for being a woman beater. This after the famous dribble wizard was recently thrown in jail for assaulting his gorgeous girlfriend, Zinhle Khumalo.

According to his girlfriend, Zinhle Khumalo, she opened a case of assault against the striker at the Midrand Police Station on Sunday. Shonga was arrested and given bail but failed to appear at a later date, prompting the magistrate to issue a warrant of arrest for the footie. Shonga had allegedly beat Zinlhe up on the same day at her home in a townhouse complex in Midrand, north of Jozi.

Zinhle told police the soccer star turned her into a punching bag after she caught him with another woman at her complex. Her statement suggests the 23-year-old striker lost his cool and beat Zinhle when she confronted him about the issue.

“On Sunday 24-05-2020 at about 00h20 early in the morning, I was at my complex (Sandridge Heights), walking toward my house when I noticed my boyfriend, Mr. Justin Shonga, was with a girl at the same complex. Read the 27-year-old victim’s affidavit.

“I confronted him and asked him about this girl, we started arguing where he followed me to my house. In the house, Mr. Shonga began assaulting me, with his open hands, pushed me and I fell on the couch where he continued beating me.

“By that time, I was crying for help. This went on until other people from our complex came to help me. Miss Sbongile Homu told Mr. Shonga to stop beating me or else she’ll call the police. Then, Mr. Shonga stopped beating me.”

Shonga, a Zambian international initially denied assaulting Zinhle claiming there was no proof despite Zinhle’s obvious bruises and blood.

“After realizing I’d called the cops, he told me he was a former police officer, he can’t beat me and leave me with a mark to prove he was assaulting me, I’m afraid of this man,” read the statement.

When called for comment, Shonga denied the allegations. Insisted Shonga: “I don’t even know the lady.”

But after the SunTeam sent an inquiry to Zinhle, Shonga called and said he knows her but maintained he never assaulted her.

Police spokesperson Kay Makhubele confirmed the case. “It’s a domestic violence case opened in Midrand on 24 May around 4.20 am at the unit (number withheld) Sandridge Heights, Noordwyk. The victim, female age 27 years old, alleged she saw her boyfriend with another girlfriend and confronted him about the female he was with and an argument ensued.”

“The boyfriend assaulted her in front of their child and she called the police and the suspect was then apprehended.”