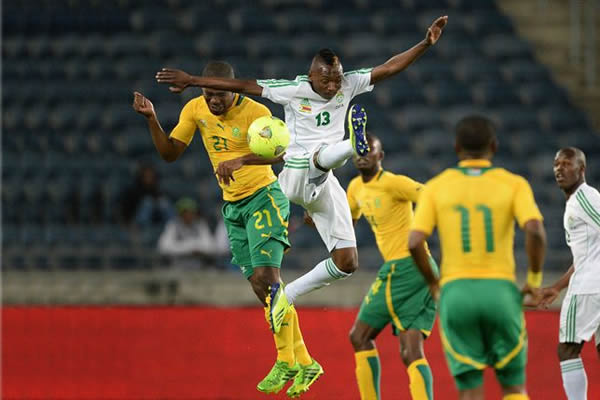 World football governing body FIFA has announced its latest rankings, with an African nation experiencing the biggest drop among the top 20, while Germany stayed ahead of Brazil despite not winning a game in 2018 so far.

Germany stayed at the top of the rankings, despite being winless in five games and having lost their past two matches in a row. The defending World Cup champions remained ahead of Brazil, while Belgium stayed in third position.

Cristiano Ronaldo's Portugal sit above Lionel Messi's Argentina, followed by Switzerland and France. Poland climbed two spots into eighth position, one ahead of Chile and two above Spain, who dropped two positions.

England climbed into 12th spot and Uruguay are now 14th, while the Netherlands appear in 17th position and Italy in 19th.

Bafana Bafana have once again fallen down the pecking order as the last Fifa World Rankings have been released. The South Africa national team’s woes continued on Thursday as they dropped even further down the Fifa World Cup rankings.

Coach Stuart Baxter’s men recently suffered defeat to Madagascar on penalties in the quarter inals of the 2018 Cosafa Cup, before walloping Namibia in the plate semi-finals.

However, the shock defeat has seen Bafana Bafana fall a further two places from 72nd position on the rankings to 74th.

Meanwhile, Barea’s victory over Bafana together with their impressive run in the competition has seen them move up eight places to position 106 on the standings.

On the other hand, Bafana’s latest decline means that Stuart Baxter’s men remain the 15th best team in Africa and with Bafana missing out on a place in Russia their ranking could further change next month.

The Warriors of Zimbabwe also dropped further five places to position 118 in the world with 265 points and number 30 in Africa. The national team has never moved up on rankings since the start of the year.

Their lowest ranking was in October 2009 at 131st place. Currently, the team is in South Africa, taking part in 2018 COSAFA Cup where they have reached the finals for the second time in a row.

Nonetheless, in terms of African teams who will battle at the upcoming Fifa World Cup in Russia, Tunisia top the African standings, although they have dropped from 14th to 21st place ahead of the showpiece event on the overall standings.

Senegal are currently the continent’s second-best team, while Nigeria are seventh on the continental rankings having dropped down one placing from 47th to 48th overall.

Africa’s other World Cup contenders Morocco and Egypt occupy position 41 and 45 respectively on the rankings.

At the top though, Germany continue to languish at the summit with Brazil, Belgium, Portugal, Argentina, Switzerland and France hot on their heels.

Hereby is a list of Africa’s current 10 best teams following the release of the latest rankings by Fifa.