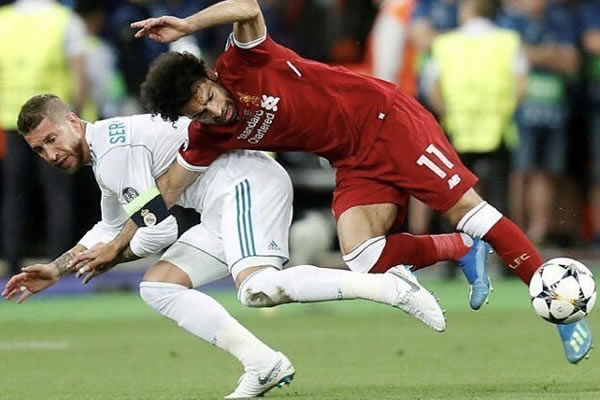 Real Madrid captain Sergio Ramos has broken his silence on accusations he intentionally injured African superstar Mohamed Salah in the UEFA Champions League final, and came up with a weird point of view when discussing his clash with Liverpool goalkeeper Loris Karius later in the game.

The Los Blancos defender tackled Liverpool's Salah in the first half, which led to the winger dislocating his shoulder and having to be substituted.

"Bloody hell, they've given this a lot of attention, the Salah thing… I didn't want to speak because everything is magnified," Ramos said at a Spain media day, according to the Daily Express.


"I see the play as it is. He grabbed my arm first and I fell to the other side, the injury happened to the other arm and they said that I gave him a judo hold."

Ramos also spoke about the incident with Reds goalkeeper Karius, after studies revealed the shot-stopper had sustained a concussion after being hit by the centre-back's elbow.

"After the goalkeeper said that I dazed him with a clash with me. I am only missing (Roberto) Firmino saying that he got a cold because a drop of my sweat," he added.

Recent medical scans have revealed that Karius did suffer a concussion after being hit by Ramos' elbow shortly before his first major howler in the Champions League final.