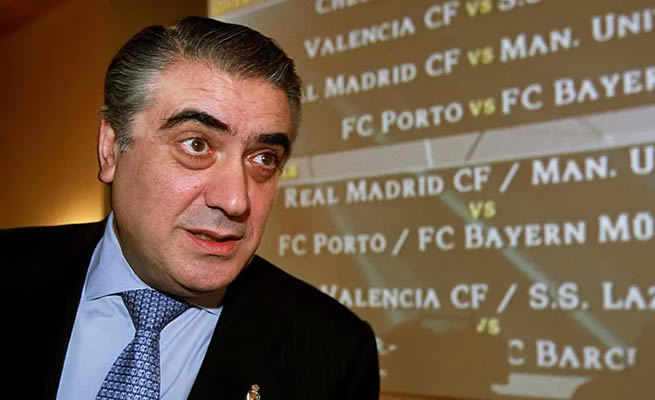 Sanz, 76, was president at the Bernabeu from 1995-2000, a period in which Real won the Champions League twice.

The former Real president was taken to hospital on Tuesday, with newspaper El Mundo saying he had been suffering from the novel coronavirus. His son said he had a respiratory disease.

"He did not deserve this end in this manner. One of the best, most courageous and hard working people I have seen in my life. His family and Real Madrid were his passion."

Sanz signed players such as Roberto Carlos, Clarence Seedorf and Davor Suker during his time in charge of the 33-time Spanish champions,

Sanz's son Fernando, 46, played for Real Madrid from 1996-1999 before spending the final seven years of his career at Malaga.

Sanz had initially chosen to stay home while feeling sick so as not to further overwhelm Spain's medical service, but ultimately went to the hospital on Tuesday when his fever had lasted for eight days. After testing positive for COVID-19, an infection gave him kidney failure and he died Saturday night, according to The Guardian.

He is survived by his wife, Mari Luz, and his five children: Lorenzo, Francisco, Fernando — who played for Real Madrid as a defender from 1995 to 1999 and now serves as a La Liga ambassador — María Luz [Malula] and Diana.

More than 24,000 cases of coronavirus have been reported in Spain, with nearly 1,400 deaths as a result of the respiratory disease.