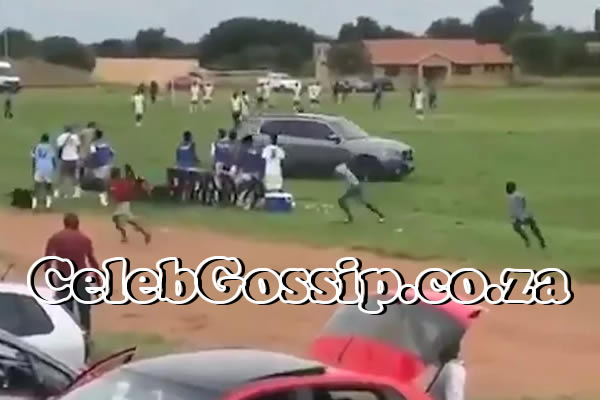 Soccer fans around the country are still stunned after an unidentified man drove his car onto the pitch and allegedly tried to run over the referees and players during an ABC Motsepe League game at Letlhabile Sports Ground in Brits in the North West on Sunday.

Video clips of the shocking incident have been circulated on social media showing the driver dangerously speeding his SUV on the pitch with bewildered players and match officials scurrying for safety during a match between home side Luka Ball Controllers and Polokwane City Rovers FC.

North West region SA Football Association (Safa) chairman David Moloantao said Luka Ball Controllers would be charged as the home team for breaching Safa's Uniform Rules and Regulations after failing to provide security for the teams‚ supporters and the match officials at the game.

‘We as #SAFPU are shocked to have witnessed such barbaric behavior. There is no place for it in football. We will be meeting in earnest with @SAFA_net to resolve.’ Sec. Gen Nhlanhla Shabalala on #ABCMotsepeLeague incident over the weekend. pic.twitter.com/vSXVs5GyNB

“The home team [Luka Ball Controllers] will be charged for breaching Safa’s uniform rules and regulations since they failed to provide security for both teams‚ spectators and match officials. It will be the responsibility of the club owner to identify the perpetrator of the incident‚” he said.

Letlhabile Police Station could not be reached for comment at the time of publication.

Moloantao advised both teams and the match officials to seek medical assistance and counselling.

“As Safa we advise both teams and the referees to seek medical assistance and counselling because the whole incident was traumatising for them. We also advised the match officials to open cases of attempted murder with the police and I have been informed that they are in the process of opening the cases‚” he said.

Safa’s legal head Tebogo Motlhanthe pleaded for caution and said they would need to tread carefully as they attempt to make sense of the matter.

“Charging anyone right now would be jumping the gun. I cannot safely say we are to charge anyone on a mere security issue. We are first going to get reports from both teams and the match officials and the reports will advise us on what to do‚” he said.

City Rovers were leading 2-1 with 15 minutes to go when driver sped his car onto the pitch.

“I used my own car to collect the referees and take them to the police station. We used our cars to save people. We took match officials‚ the match commissioner and players off the field‚” he said.

Makara said Rovers coach Jabulani Patrick Motshweni was nearly hit by the speeding car and one of their players suffered minor injuries to his face and forehead.

“Our coach almost got hit by the car. The car almost bumped into our bench. One of our players suffered a minor injury on the forehead and on the side of the face after tripping from a chair as he was trying to run away from the field.”

Makara also opened a case of public disturbance at the Letlhabile Police Station.

He said they would pursue the case as a team until action is taken.

“We almost lost our lives‚” he said.

“We have youngsters‚ minors in our team aged 17 and 19‚ and we play football so that we take these kids off the streets. We are going to fight this to the bitter end. Action must be taken.”

Apparently he wanted to run over the referee 😞. TF?! #ABCMotsepe pic.twitter.com/dqjUCUyIHv

Makara asked for police protection at all their future games.

“We ask that police officials be on the pitch at our games to protect us‚” he said.

“No-one from our team got affected. We didn’t open any case‚” said Richard Munyai‚ the driver of the club‚ who was present at the game when the incident occurred.

Moloantao said a disciplinary hearing on the incident is set to take place in the coming days.