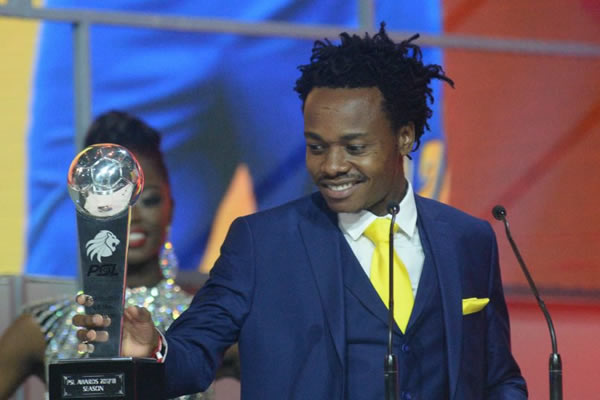 Percy Tau secured a double-header of honours at the PSL Awards in Sandton on Tuesday night. The Mamelodi Sundowns player won both the Footballer of the Year and Players’ Player of the Year accolades

Maritzburg United’s Siphesihle Ndlovu also won two awards, from the four he was nominated for. He walked away with the honour of being the Midfielder of the Season and The Best Young Player of the Season. Not a bad way to get over his side’s Nedbank Cup final defeat earlier this month, hey?

There was perhaps a shock in the Goal of the Season award. The much-fancied Hlompho Kekana saw his strike from the halfway line vs Orlando Pirates lose out to Golden Arrows’ Siphelele Magubane and his curler against Polokwane City.

All the PSL award winners:

Referee of the Season: Victor Gomes

Fresh headache for Ramaphosa as military vets demand R250,000 each for taking part in...

General News Sharon Banda - 29 November 2020 0
A group of military veterans who marched and terrorised foreign traders in Durban have demanded that the government pay them a one-off gratuity to...

Dr Tumi speaks on hating gays after pulling out of show because Somizi was...

Celeb Gossip Innoe Malaba - 29 November 2020 0
Dr Tumi has addressed allegations from 2018 that claimed he pulled out of a gospel event because Somizi Mhlongo was going to host it. Popular...

Rapper Da L.E.S shares why he will never ever have sex with Boity Thulo

Celeb Gossip Lee Nyathi. - 29 November 2020 0
After years of friendship, Les explained how he just does not see Boity in a romantic light. Boity Thulo, Pearl Thusi, and Bonang Matheba… These...