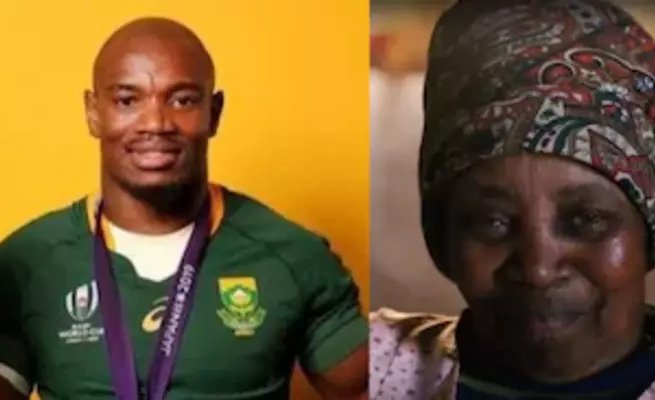 Makazole Mapimpi scored South Africa's first-ever try in a world cup final and made the nation proud. However, no-one could be prouder than his gran Nofikelepi Mapimpi.

Rural Village Rugby had its proudest moment on Saturday when Makazole Mapimpi became the first ever SAn to score a World Cup try in the Final!

Here he is holding the 6th Dali Mpofu Easter Rugby Tournament Trophy in 2013…then the Webb Ellis Cup!

The Springboks are currently touring South Africa and are in Port Elizabeth. The world champions are being cheered by crowds of fans as they display the trophy. A number of notable players hail from Port Elizabeth, such as Mapimpi, Kukhanyo Am and none other than the heroic captain Siya Kolisi according to ewn.

When Mapimpi was young, Nofikelepi used to chastise him for being so crazy about sports, particularly rugby.

“Since he was in school, this is what he wanted. I used to shout at him [for playing], then I realised I was wrong. He knew the reasons he was at school. He wanted rugby.” She remembers how he used to find a way to play sports when he was young. “He would roll the plastics into a ball and kick it.”