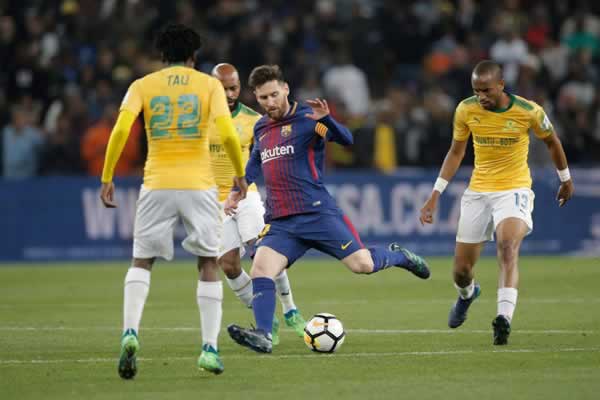 According to the Joburg Metro Police Department (JMPD), a man arrived at the stadium, affectionately known as Soccer City, with the intention of selling fake tickets to fans who were eager to watch the international friendly match.

While the man is still at large, authorities are not yet sure if there were any soccer fans who fell prey to the scam and purchased the fake tickets.

JMPD spokesperson Chief Superintendent Wayne Minnaar explained to the The Saturday Star that about half an hour before the kick-off, he was spotted by officers near the N17, brandishing counterfeit tickets.

“Officers saw him flashing the tickets to passing motorists outside the stadium and when they tried to approach him, he started running.”

The JMPD on the scene then gave chase as the man ran towards long grass near the stadium in Joburg.

But Minnaar said that when the officers got close to him, he proceeded to throw the fake tickets into the air and jumped into a nearby dam.

“He is still at large and officers are looking for him.”

Minnaar added that the fake tickets closely resembled the official ones but the only difference were the barcodes, which couldn’t be read by the stadium’s scanner.

“The public is being cautioned about buying of fake match tickets, which, when scanned will not allow access.

“Anyone found in possession of fake match tickets can be arrested and charged for fraud.”

Although the police are uncertain about the number of fake tickets that the man sold, they managed to seize 12 fake match tickets which varied in price from R40 to R150.