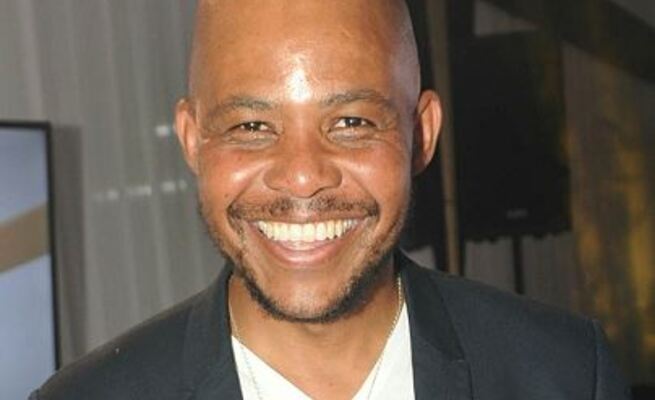 South African Broadcasting Corporation (SABC) soccer pundit David Kekana is up in arms with his estranged sugar mom over the sharing of their estate and control of their company, the two in squaring up in court.

According to Sunday World, Kekana’s wife, Lesley Jane Kekana, had approached the Johannesburg high court to compel him to hand over share certificates of trust accounts he reportedly took when vacated their multi-million rand home in Dainfern Estate, north of Johannesburg.

Details in the court documents, show that Lesley and John Holder are trustees of Carmel Trust, which is believed to own 90% of David’s company Sales Talk 98, while Kekana was a trustee of DK Trust, which owns the remaining percentage of the company.

Lesley, who is 10 years older than Kekana, claimed that Sales Talk acquired a R5m house in the grandiose estate 12 years ago, two years after their marriage under ante-nuptial contract in 2005.

She stated that their nuptial was not regularized because the two month grace period to have it registered as provided for by the law, had expired.

Lesley claimed that she lend Sales Talk R3m so that it could be eligible for a bond and the remaining R2m was paid for by the bank. She then reportedly paid another R1.2m on Kekana’s behalf to settle the bond account, in exchange for his 10% share in DK Trust, which she said she would hold as collateral until he pays her back.
It is alleged the two agreed he would pay in monthly instalments.

However, according to Lesley he only paid R243,000 over nine months before defaulting, straining their marriage, resulting in Kekana moving out of their home in 2015.
In the court papers, Lesley alleged that when he vacated the home, he took with him her car, the original signed share certificates and Sales Talk company documents, as well as her will, among other documents.

In his opposing affidavit, Kekana, who now lives in Pimville, Soweto, denied taking the Carmel Trust and DK Trust share certificates, saying the latter was as good as defunct.

He countered that the total due to him amounts to around R1,800,567.19, adding that the marriage should play a part in their case.

Kekana further refuted the claims that the trusts were members of Sales Talk and accused Lesley of bringing on board her son from a previous marriage as one of the company directors through the back door.

He also denied that Lesley loaned Sales Talk R3m and said the money came from Investec Bank and not from her, as she claimed.

According court papers filed by Kekana, he doesn’t owe Lesley anything as he paid back her R1.2m by allowing her to use R10,000 a month from his credit card and paying for all the household overheads.

He further denied that he took Lesley’s vehicle and said he only took his two cars and his documents from the safe and left the house.
“Lesley withdrew almost R2m from the flexi facility of the bond account but returned it after threats of legal action from the bank, following my complaint to them,” he alleged.

Attempts by the publication to get a comment from both Kekana and Lesley were fruitless. He ( Kekana) was unreasonable and Lesley said she was driving and was not willing to entertain an interview even later.