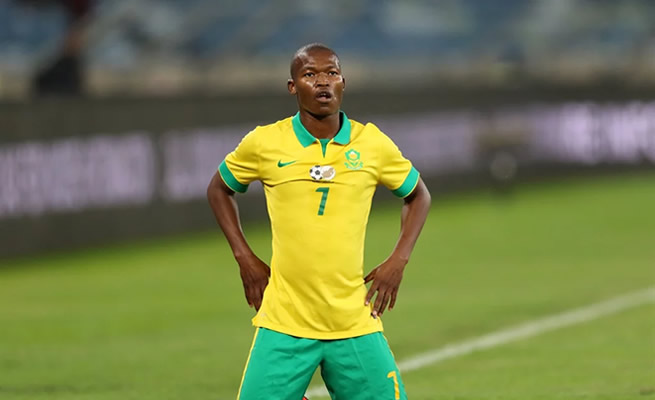 The 29-year-old is reportedly dead broke and is understood to have relocated to his family home after he could no longer afford to pay the rent of his luxury apartment in Midrand.

“At the moment it looks like he is down and out and he decided to go back home to allegedly avoid being kicked out of that apartment he was renting,” said a source.

“People have been ridiculing him because he was apparently gloating about a big house he was renting,” the source added.

Early this year it was reported that Highlands Park had decided not to sign Mandla Masango after the former Kaizer Chiefs player had a trial with the Lions of the North.

The 29-year-old Masango is a free agent but has been without a club for more than a year having left Danish side Danish side Randers FC.

Masango, who also played at Supersport United, was hoping to impress the technical staff at Highlands Park but coach Owen da Gama confirmed they will not sign the winger.

Masango sits idle at home frustrated and with no job. According to a source close to the player, Masango has been club-less since he left Danish side Randers FC in August last year after he fell out of favour with the coach.

His career blossomed in the 2014/15 season while he was still playing for Chiefs as he won the club’s Top Goal Scorer Award with nine goals and Most Improved Player Of the Season accolades.

The veteran player’s career took a nose dive when he left Amakhosi under a cloud after refusing to sign a contract renewal to join Randers at the start of the 2015/16 season.

He also turned down lucrative offers from Orlando Pirates and Bidvest Wits in favour of a move abroad. But he struggled to obtain a regular place in Randers which led to a six-month loan move to SuperSport United in January 2017.

The former Bafana Bafana player returned to Denmark in July last year hoping to take his career to greater heights only to return home miserable.

But Masango has himself to blame for his fate. He turned down an offer to join Cape Town City in January last year.

Added the source: “City management were prepared to pay him a good salary, but he turned it down. Pirates assistant Rhulani Mokoena had shown some interest, but the chairman wasn’t prepared to sign him.”