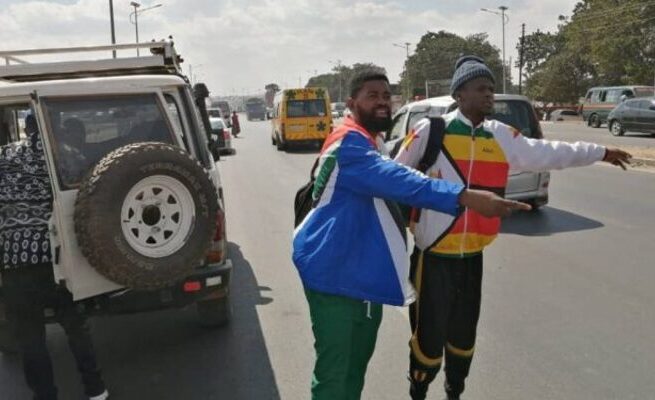 The two had planned an epic journey to Egypt to watch their teams compete at the 2019 Africa Cup of Nations (AFCON).

The intrepid pair were stranded for three days at the Kenyan-Ethiopia border town of Moyale after being denied visas by the Ethiopian authorities to pass through the country. Bafana fan, Msila, has decided to make his way to Egypt by air.

“I found that it is going to be difficult for us to pass through the border so I choose not to be a difficult person to other countries,” said Msila on Twitter.

“I feel that it is better for me to go back to my country to get a visa… or take another mode of transport to go to Egypt.”

The two football fans returned to Nairobi after completing over half of their journey by road. They travelled over 6000kms without incident before being halted by changes to visa rules in Ethiopia.

Ethiopia introduced visa immigration requirements for all Zimbabweans and South Africans travelling by road through the country starting in March this year, but there is a visa waiver for those travelling by air.

Zhakata remains determined to complete the journey, despite the loss of his Bafana Bafana supporting friend.

#CapeToCairo update
Please note that I, Alvin Harry Jnr Takura Zhakata am proceeding with my journey to Egypt to watch the @AFCON2019_en. My friend @BothaMsila has made his decision, and is already on his way to Nairobi, but I will forge ahead and fulfill my dearly held dream pic.twitter.com/YJKQkc0ta3

AFCON 2019 gets underway on Friday in Cairo with hosts Egypt meeting the Warriors of Zimbabwe in the opening match. The team have never progressed beyond the group stages of the competition and this is only the second time they will compete in successive AFCON tournaments.

BAFANA BAFANA DREAM OF REPEATING 1996
Bafana Bafana begin their quest for a second continental title with a tough fixture against the Ivory Coast on Monday 24 June. Also grouped with Stuart Baxter’s boys are North African heavyweights Morocco and neighbours Namibia. South Africa won the competition when they first hosted back in 1996 beating Tunisia 2-0 in the final, in front of a packed FNB stadium.