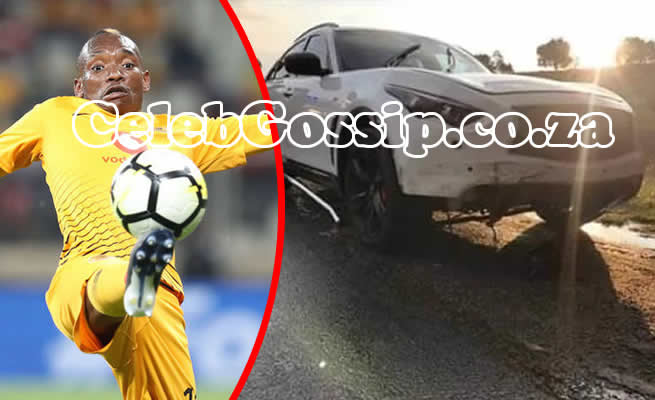 Kaizer Chiefs playmaker Khama Billiat was left unharmed after his car veered off the road.

The cause of the accident is unknown for now. Pictures published by a news website from Zimbabwe shows that Billiat’s car suffered minor damages in the accident.

According to Soccer24, Billiat’s car went into a gully after it veered off the road due to the rainy weather.

This is not the first time the talented striker has cheated death after being surviving an accident.

In 2013, after being signed by Mamelodi Sundowns, Khama Billiat had another narrow escape when his car crashed into a tree, but he suffered only minor bruising. Billiat suffered minor bruises to his neck and chest.

In February 2017, Billiat had a brush with death in Johannesburg, in the early hours of the day when six armed robbers pounced on the Mamelodi Sundowns talisman, held him hostage, before stealing his watch and wallet.

The 26-year-old Warriors’ star was, however, unhurt in the terrifying incident although he was left to battle the psychological trauma of coming face-to-face with the agents of crime who have turned South Africa into one of the most dangerous countries in the world.

Reports said the robbers, who were armed with AK-47 assault rifles, pounced on Billiat when he stopped at an Engen service station.

Mzansi is yet to fully recover from the brutal killing of former Bafana Bafana captain and Orlando Pirates captain Senzo Meyiwa who was shot dead in 2014 while in the company of his side chick and singer Kelly Khumalo.

Khama Billiat is one of the footballers with the highest profiles in Africa and is reported to be the highest paid soccer star in the South African Premiership.

He is the first Zimbabwean star to feature at the FIFA Club World Cup where he represented Sundowns, as the champions of Africa, in Japan in December 2016.