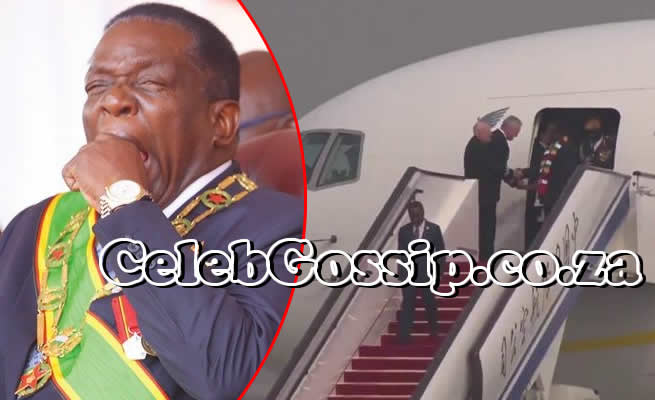 Just the basic cost of the flight hours of the leased “dream jet”, chartered to take Zimbabwean President Emmerson Mnangagwa to Moscow and Davos in Switzerland, would have been enough to pay the monthly salary of 535 of the country’s doctors.

Shortly before Mnangagwa’s departure last Sunday, he effectively crippled his country by announcing a petrol price increase of 150%. Then he departed on the jet to Moscow, travelling in a style that dripped luxury. He first went to Moscow, where he was expected to ask Russian President Vladimir Putin to help Zimbabwe out of its financial woes.

According to Aviation Week magazine, the jet in question is the world’s only Boeing 787 Dreamliner with a VIP configuration – a five-star hotel with wings that can carry 40 passengers.

With the callsign 2 DEER, the aircraft is the flagship of the Chinese company Deer Jet, which flies its VIP air fleet out of Dubai. On board is only the most expensive crystal glassware, silver and porcelain. In the past few months the aircraft has been leased by the presidencies of Angola and of Congo-Brazzaville.

The country’s armed forces reportedly used lethal force to crack down on opposition and there were reports, by Saturday, of at least 12 deaths.

On Tuesday the Zimbabwe government cut all internet and social media connectivity, which left residents, as well as the business sector, without communication.

But in a bizarre twist, the Zimbabwe government’s decision to shut down the internet also appears to have hampered its ability to pay for Mnangagwa’s luxury ride, leaving it stranded in Moscow.

Allegations in the Zimbabwe media and by professor Jonathan Moyo, previously minister of higher education in former president Robert Mugabe’s cabinet, suggest that Mnangagwa’s government is battling to foot the bill for the luxury jet.

On Thursday Moyo said that in light of the political instability in the country, the booking agent had insisted on full, upfront payment for the whole trip. Jealousy Mawarire, spokesperson of the National Patriotic Front, which is sympathetic to Mugabe, tweeted that Mnangagwa’s lift could be stranded in Russian if Zimbabwe’s Reserve Bank could not effect the transaction soon.

These allegations were dismissed as politicking, but by yesterday, aircraft-tracking website FlightRadar24 indicated that the jet hadn’t left Moscow since last Sunday.

Days that a jet is left parked at an airport are usually commercially calculated at a rate of about 10 flight hours a day. The parking costs for just the first five days would therefore amount to about R13.6 million.

Doctors in five state hospitals have been on a go-slow since December, because of poor pay, horrific working conditions and a shortage of medication. Patients are being forced to buy their medication in cash, using US dollars, before doctors can treat them, the Zimbabwean Hospital Doctors’ Association said.

The problem was exacerbated in the past week, as most doctors and nurses were no longer even able to pay for transport to work.

Mnangagwa’s announcement meant the fuel price doubled to more than R42 a litre and R44 a litre for diesel, the highest in the world.

It brought the country’s traffic to a standstill.

Ben Freeth, who has been battling for more than 10 years to secure compensation after the government expropriated his deceased father-in-law’s farm, said: “It feels like Judgement Day. We hear gunfire and before they turned off the internet, photographs of dead and wounded people began doing the rounds. We were all literally in the dark about what was happening in the country.”

After about 24 hours, government reactivated internet access on a limited basis, but social media was still being restricted in what is understood to be an attempt to hinder any further resistance.

“It’s a totally unreal situation, internationally, with a country that has literally come to a standstill,” Freeth said.

On Thursday shops in Harare began to reopen, with people desperately trying to buy groceries.

Bus traffic between South Africa and its neighbour has largely been suspended. One fuel depot owner, who asked not to be named, said many trucks waited on the South African side of Beitbridge border post on their way to Zambia, fearing they would be stripped in traps.

Another South African doing business in Zimbabwe told City Press’ sister publication Rapport, via satellite phone, that formal and informal roadblocks on the road south of the capital had become a common sight.

Mnangagwa is expected to return to Zimbabwe on Friday, after the World Economic Forum in Davos. That’s if he manages to pay for his luxury transport.