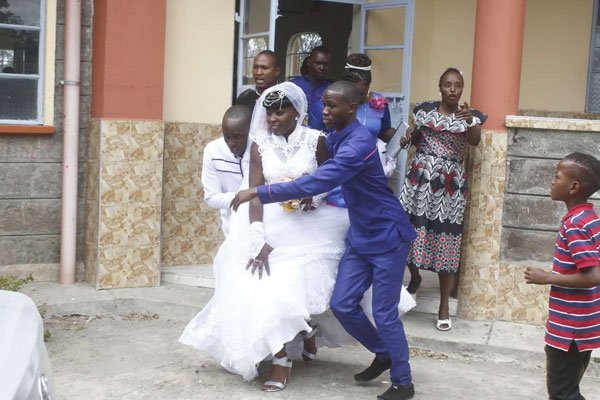 A church wedding turned chaotic in Nakuru,  on Saturday when a 21-year-old woman stormed the ceremony claiming to be the wife of the groom.

The wedding between Mr Dennis Kinyanjui and Ms Agnes Wangari was being held at ACK Jehovah Shammah Nakuru in Pipeline area when the irate woman, Ms Agnes Wanjiru, stormed the church in the company of her mother and friends.

Ms Wanjiru claimed she is six-months pregnant and has been cohabiting with Mr Kinyanjui for the past three years. She claimed the groom had committed to take care of her and their unborn child. 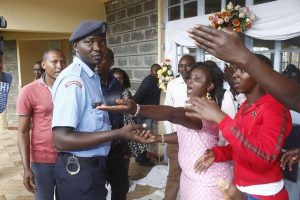 Ms Agnes Wanjiru climbs the gate of ACK Jehovah Shammah Mission Centre in Pipeline, Nakuru Kenya in failed bid to stop a wedding. Ms Wanjiru claimed to be the groom's wife, having cohabited with him for the past three years.

Drama ensued when she was barred from accessing the church compound, leading to a bitter exchange of words.

As the confrontation was taking place, the wedding was conducted hurriedly inside the church where the clergy pronounced the two as husband and wife.

Ms Wanjiru queried why the wedding was conducted at ACK Jehovah Shammah and not at the Saints Prayers Fellowship situated in Ponda Mali, Nakuru where they have been members in the past year.

The Saints Prayers Fellowship church Bishop Stephen Kariuki had received a letter from Ms Wanjiru’s lawyer to stop the wedding.

The jilted woman's mother, Ms Lucy Wanjiku, climbs a gate to disrupt a wedding claiming her daughter is married to the groom. 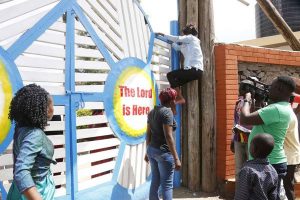 Although the wedding went on under the leadership of a pastor identified as Livingstone Kimani of Heroes of Faith Church Ponda Mali Nakuru, the two factions extended the bitter exchange outside the church.

The confrontation left some of the church’s window panes broken.

After the wedding, the bride and the groom were whisked away in vehicles at high speed.

According to Ms Wanjiru’s mother, Ms Lucy Wanjiku, the groom had visited her with his family to ask for her daughter’s hand in marriage and both families had consented to the union.

“We were yet to make plans to fully formalise their marriage when we were informed that he was planning to marry another woman,” said Ms Wanjiku.