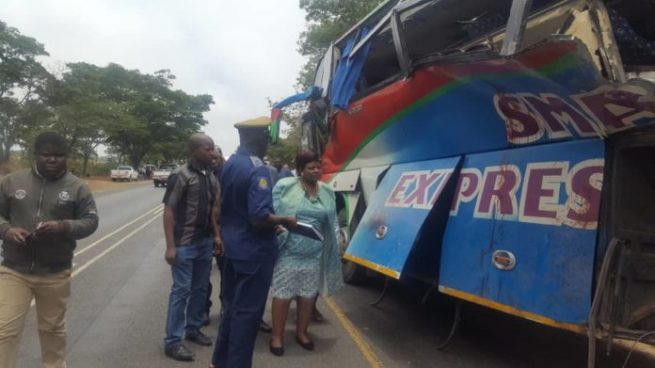 THE company, whose bus was involved in the Rusape bus disaster in Zimbabwe, which claimed the lives of 50 passengers last week, has had several other accidents involving their buses since the beginning of the year.

But speaking to The Weekender recently, Smart Express owner Mrs Arima Mkwamba refuted claims alleging that she used juju to enhance her business, saying she operated a clean business and had not sought to enhance it using juju. She blamed the accidents on reckless drivers instead.

“I am now worried by the number of accidents that have occurred involving our buses and this has pushed me to investigate on what could be causing them. I realised that it is the drivers we employ who are not competent on the road and this has resulted in my name being linked to witchcraft and juju,” she said.

“I did not use my family name on our buses because we operate a clean business, so the name “Smart” shows that we are clean. My family and I have never used any juju to enhance our business, we run a clean business. It is just unfortunate that we have been victims of so many accidents in a short space of time.”

In September this year, a Smart Express bus was involved in an accident, which killed one person and left 11 others seriously injured along Mutare-Masvingo highway.

The same buses were at the centre of controversy last year when a man died after he was manhandled by touts while intending to board a bus to Mutare near Roadport Bus Terminus along Robert Mugabe Road.

There have also been claims by the public that the company sets ridiculous targets for its crews, which was the reason the drivers were reckless, as they sought to meet them.

“We do not set targets for our buses and we never force them to go to Harare and come back to Mutare on the same day. If the bus cannot come back we urge the crew to sleep over in Harare and return the following day,” he said.

“This particular driver has been with us since we started the Beitbridge-Mutare route over a year ago and he has never had a problem. He had been driving buses for Zupco for more than 10 years before he joined us.”