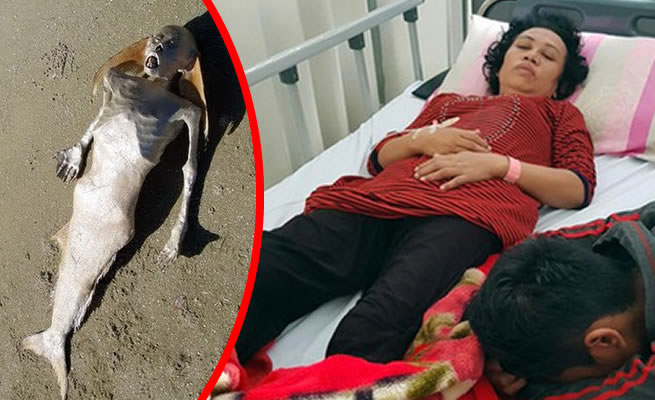 A 52-year-old Indonesian woman identified as Nining Sunarsih, who was on vacation in Sukabumi, West Java, when she was swept away by a strong wave on Citepus Beach, has been found.

The lady who was presumed dead by authorities when she was washed away by the strong wave in January last year, turned up alive on the same beach – 18 months later. At the time, eyewitnesses said they heard the woman screaming and waving her hands for help but they were too scared to go in to help.

Search and rescue operations didn’t find any sign of her until a week after the tragic disappearance when a dead body was discovered in the area. They asked Nining’s family to come and identify the body, and even though it was reportedly in very bad condition, her relatives were convinced that it wasn’t her, because it lacked a distinctive birthmark on the abdomen, and the fingernails looked very different.

It was gathered that her family who never gave up hope of finding her alive, returned to the same beach on Saturday after her father began having mysterious dreams and found her lying unconscious on the sand, wearing the same clothes as on the night she vanished. The family began searching in the early evening and at first were unsuccessful, but discovered Sunarsih around midnight.

She was discovered by her sister – who was one of the people who had watched her disappear. According to reports Sunarsih was unconscious, fully clothed, and around 500m (1,600ft) from where she initially vanished.
Sunarsih has since been taken to hospital, where doctors say her vital signs are stable and she is expected to make a full recovery. It was further gathered that she has since regained consciousness and has been able to eat and drink, but is so far unable to talk – meaning nobody has been able to question her about what happened and where she has been.

What do you think of this? Please leave your comments below.