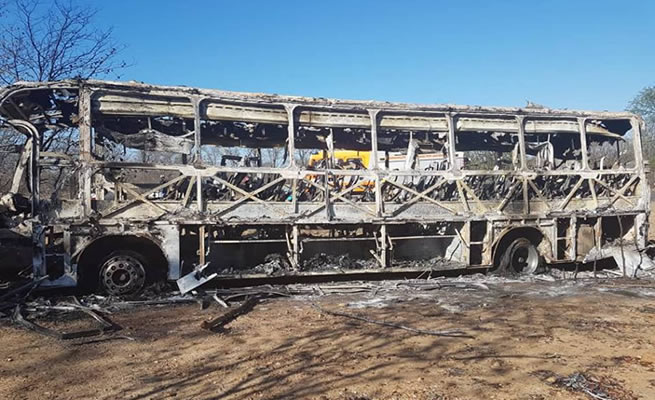 Forty-two people are suspected to have died after a bus headed for South Africa caught fire along the Beitbridge-Bulawayo road in Zimbabwe.

Preliminary investigations suggest that the fire was caused by hazardous substances on board.

The bus was coming from Zvishavane, a mining town in Midlands province, and headed for Musina, a border town in South Africa’s Limpopo province.

Fire engulfed the bus at 11pm near West Nicholson in Matabeleland South. Reports said a gas cylinder in the luggage compartment of the bus exploded.

Survivors and eyewitnesses told of the desperation that followed as people tried to get out of the bus which was now a fireball. Many were burnt alive, their screams piercing the night calm.

One survivor said: “First there was a smell, we could smell gas. One of the passengers then went over and told the driver whose first reaction was to turn on the lights inside the bus. At that moment there was a huge explosion and there was fire everywhere. The heat was intense.”

Khulekani Ndlovu, a motorist who was at the scene moments after the bus caught fire, said: “It was hell on earth. There was just nothing one could do to help. I have never seen anything like it.”

The bus was carrying passengers who planned to overnight and shop in Musina.

A police spokesperson said police would require forensic analysis of the remains to determine the number of dead, but the death toll would be “substantial”.

It is the second bus disaster inside two weeks after two buses collided on November 7, killing 47 people.

At least 27 people were admitted at Gwanda District Hospital after suffering burns.

The high cost of gas in Zimbabwe has prompted many Zimbabweans to journey with gas cylinders to neighbouring South Africa for a refill. Zimbabweans pay an average of $10/kg for gas, while the price in South African is roughly five times less at R25/kg.