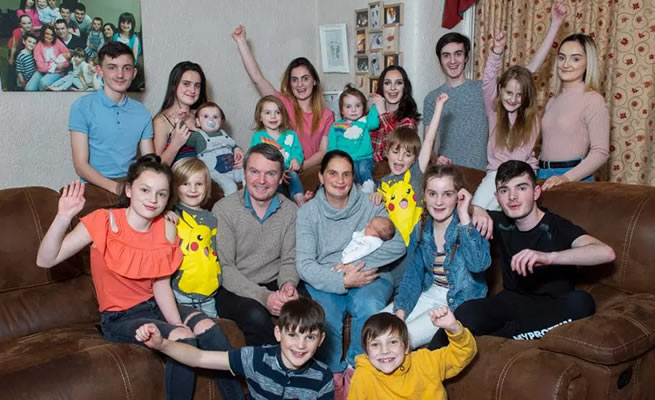 SUPERMUM Sue Radford is celebrating the birth of her 21st baby.

Sue, 43, welcomed Bonnie Raye into her king-sized clan after a 12-minute labour. She said: “I thought I’d need more than gas and air but there wasn’t any time.”

Her other kids were thrilled when she brought 8lb 4oz Bonnie back to the family’s ten-bedroom converted care home in Morecambe, Lancs.

Sue said: “They were all fighting over the first cuddle. It’s such a lovely moment when you bring a newborn home and the others are all lined up ready to hold her.”

Her baker husband Noel, 47, said: “I don’t think anyone sets out thinking they’ll have 21 children. We thought we’d have three.”

Supermum Sue said: “We’ve both decided we don’t want any more. Bonnie has completed our family.”

The couple have said similar things before, including after 14-month-old Archie. And Noel even had a vasectomy, later reversed, after baby number nine. But Sue, who has spent a total of 811 weeks pregnant, insisted: “It has to come to an end at some point.

“The maternity clothes will be going in the bin shortly. I won’t miss being pregnant at all. All the midwives at the hospital were asking if they would see us again next year and we both said, ‘definitely not’. We’re just going to keep enjoying the children and enjoy our grandchildren.”

The couple, who support themselves with their bakery and claim only child benefit, had their first baby when Sue was just 14. Christopher is now nearly 30. And four-day-old Bonnie Raye is an aunt to his 16-month old daughter Maisie. She has two other nieces and a nephew as Sue and Noel’s eldest daughter, Sophie, has three children. The family shot to fame on the Channel 4 documentary 15 Kids and Counting in 2012.

Newest arrival Bonnie Raye tipped the scales at 8lb 4oz when she arrived at 6.43pm on Tuesday at the Royal Lancaster Infirmary, where midwives have delivered 14 of the Radfords’ children. She was taken home to Morecambe, Lancs, on Wednesday.

Sue said: “The other kids were so excited. They were all fighting over the first cuddle with Bonnie. It’s such a lovely moment when you bring a newborn home and the others are all lined up on the sofa ready to hold her. It’s so wonderful to see how much they absolutely adore her already. It’s just a really special time.”

The couple, who are both adopted, suffered a stillbirth in 2014 when Sue was 21 weeks pregnant. Sue believes that baby, Alfie, has been looking down on Bonnie.

She said: “We found out we were pregnant with Bonnie on the same date we discovered we were expecting Alfie, and they had the same due date. I think she’s got a strong connection with Alfie. It feels special that they share those dates.”

Sue admitted that with so many children it was tricky finding a new name — particularly one that ends in an “ie” sound, like the rest of the Radford girls.

Sue said: “The names I liked, Noel didn’t, and the ones he liked, I didn’t. The ones we both liked, the kids didn’t. It’s been quite hard. We were sat round the dinner table one night, just me and Noel and the older ones, and Bonnie popped into my head. Everyone loved it. Her middle name is because she’s our ray of sunshine.”

Considering each day involves ferrying children to three schools and a pre-school, churning out three loads of washing and coping with three kids under four, two days in hospital must have been a welcome break for the couple. Noel joked it’s the only chance they get to have some time alone and added: “It’s why we kept having them!”

He added. “I don’t think anyone sets out thinking they will have 21 children. We thought we’d have three. But we just love having a big family. There’s never a dull moment. It’s a happy house full of laughter and we just love being surrounded by all our children. The kids love being part of a big family too. It was a strange feeling coming home from hospital thinking it would be the last time we would drive our own newborn home. Then we’ll be getting rid of the cot, then the bottles. It’s all those milestones that will hit us.”

Perhaps unsurprisingly, the children are not convinced they have welcomed their last sibling into the fold. Sophie, aka Number Two, predicted: “They won’t stop on an odd number.”

Chloe said: “I really thought Archie would be the last then a few months later mum said she was pregnant again. They might not plan on having another but it could still happen.”

Max laughed as he said: “They say that every year, then every year there’s a baby.”