A 95-YEAR-OLD man shocked his family when he woke up at his own funeral saying he was just taking a nap, according to reports.

A doctor told the family Budh Ram was dead after he fainted in his home in the north-western region of Rajasthan in India, local reports say.

Ram is said to have been declared dead on Saturday and a priest was summoned to the home to perform the pensioner’s last rites.

Photos of the large family show the men with their shaved heads, which is part of a pre-funeral ritual. 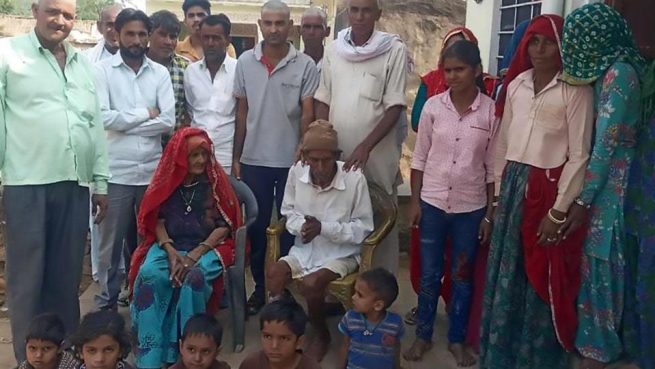 Balu Ram, his eldest son, said the family were preparing the customary bath to clean the body before the funeral when the OAP started shivering.

When the water was poured on his chest, the family were shocked to see him shaking so they took him to a bed and he started visibly breathing, reports say.

Ram reportedly sat up and told his grieving relatives he had pain in his chest so he decided to take a nap.

He told The Times of India: “He started breathing and sat on the bed soon after.

"When questioned by relatives, he said he had suffered chest pain and slept. It is nothing but a miracle."

Ram’s 55-year-old son Ranjit Ram said it was great timing because it was Diwali on Wednesday, which is the popular Hindu festival of lights.

He said: “This is a very happy Diwali for us.

"Had my father been dead, we wouldn’t have celebrated the festival as is the norm in any house where a death has occurred.

"But this time, the celebrations are going to be grand."