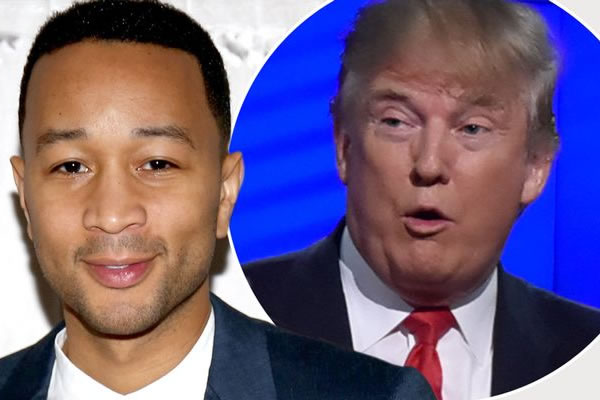 John Legend wouldn't like the workload of being President of the United States, because he loves his life the way it is.

The 39-year-old singer is very vocal about politics, but he doesn't see himself following Kanye West's example by announcing plans to run for office in the US.

He told the Wall Street Journal: "People ask me if I want to run for office, but I don't. Maybe when I'm 60 – who knows what the world is going to be then? But I love my life now and what I get to do. Part of me does want those things – when I hear things our leaders are saying, I'm like, 'If it were me, I would do this, this and this.'

"But I would not want to go to work every day, even at the Capitol Building or the White House. I just couldn't see it as the life I would want to live."

Legend and Kanye are close but the All of Me hitmaker has publicly spoken out against his friend's vocal support of Donald Trump, and he's now explained why it was important to do so on social media.

He said: "My point to him was that when you wear that hat, when you appear to be endorsing him, you're endorsing his policies as well, all of his rhetoric and not just the parts you like. I think we had to talk about it, because we didn't want people to be deceived into following his line of thought without considering the full ramifications."

Following one of Kanye's sets of tweets, Legend got in touch to urge him not to endorse the controversial White House incumbent, and the rapper responded by claiming the singer was attempting to "manipulate his free thought".

Legend's wife Chrissy Teigen, 32, has recently said Kanye learned a lot from his text exchange with Legend, but said there was no changing the 'Heartless' hitmaker's views.

She previously said: "The thing with Kanye is that his opinions have always been super strong. He's never been the guy to push them on you, but he will say what he wants to say.

"Same with John. That's why I loved that they were able to have this civil discourse. Kanye learned a lot in the months after that. John did, too."