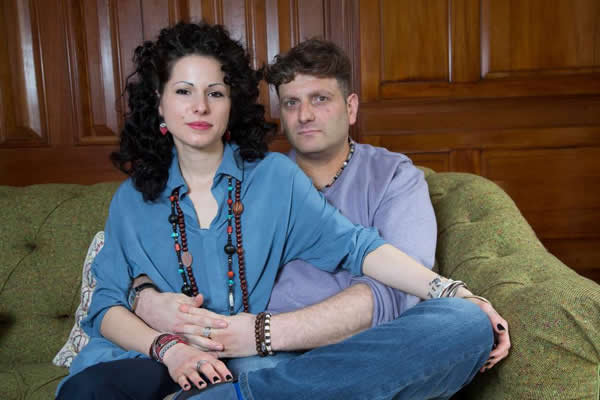 A man who had sex for the first time at the age of 45 after being fitted with a £50,000 bionic penis collapsed unconscious at home just a few days later and has been rushed back to hospital.

Andrew Wardle, who was born with a congenital abnormaility, is in hospital in Manchester undergoing keyhole surgery on his gall bladder. It is the latest in a string of operations for Andrew, who was born with bladder exstrophy: his lower abdominal wall had not formed properly.

His terrified girlfriend Fedra found him on the floor and took him to hospital where he remained unconscious for five days. The couple had booked a romantic break to Amsterdam for his birthday but did not wait for the break for Andrew to lose his virginity.


His publicist Barry Tomes told the Mail Online: 'He had a fever for days and was vomiting. They thought he had a neurovirus.

"He was supposed to be catching a train down to London to do an interview with This Morning. But Fedra rang to say she had found him unconscious. She was terrified. She has no family here to rely on. They spent the next five days in limbo. He was so ill they couldn't do any scans. They even tested for pancreatic cancer but thankfully it wasn't. It's been quite terrifying. Their biggest worry was that the damage had been caused by having sex. But it was a gall bladder issue. He is having keyhole surgery on his gall bladder this afternoon."

Mr Tomes said Fedra was now by Andrew's bedside and they would wait to find out whether he needs any further treatement.

It is now three months since Andrew underwent the third stage of his £50,000 phalloplasty – or penile implant –at University College London's Hospital. He had an erection for ten days before the implant was deflated and had sex for the first time earlier this month. Andrew has spent his life in and out of hospital but it was only in 2012 – when he was 39 – that he was finally thrown a lifeline.

Urologist Dan Wood, of UCLH, built him a new bladder while David Ralph, a fellow urologist and specialist in genital reconstruction, created his penis. He had his first operation to remove his urostomy bag – his urine had been diverted into a specially-converted stoma – in February 2014. He now has a Mitrofanoff – or catheter – to enable him to go to the lavatory.

Then, in November 2015, Mr Ralph operated on Andrew, building the penis from the skin, muscles and nerves in his left arm and the vein in his right leg. He had his third operation last December, when Mr Ralph inserted the reservoir component of his penile implant into his abdomen and capped it off. He and his team also sculpted the head of his penis.

Then, in June, he was back on the operating table for two hours to have his phalloplasty completed. Three months later, he had sex for the first time. Speaking about the experience he told The Sun: 'Fedra had booked a romantic trip to Am­s­t­erdam for my birthday, but I felt that would have been too much pressure.

"I had to test out the function every morning and night and leave it erect for 20 minutes. So, one morning, two days before we went away, it just happened. It was nice and natural — and that's how I wanted it to be. After what Fedra and I have been through, it's the cherry on the cake," he said.

ALSO READ: Man (44) who was born without a PEN!S finally gets one for R1.27 million, can now have sex with girlfriend of 6 years