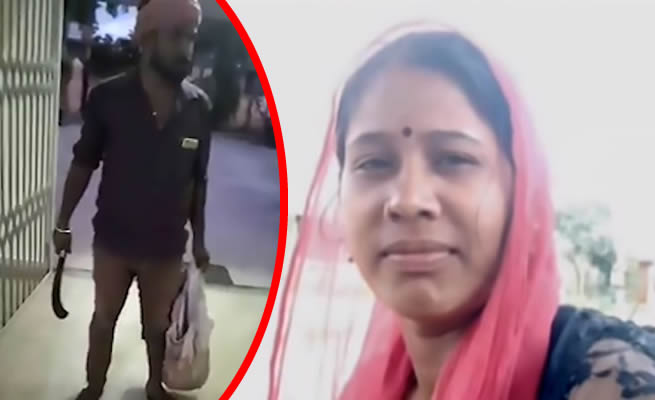 WARNING GRAPHIC CONTENT: A stunned policemen filmed on his phone while another shouted at the man to put the head back in the bin bag.

A man who hacked the head off his own wife after accusing her of cheating carried it into a police station and confessed to her murder.

Satish pulled the severed and bloody head from a bin bag and waved it by his hair as disgusted officers shouted at him to put it back away.

Branding a machete the 35-year-old stood in the police station while a stunned officer filmed on his mobile phone.

He puts wife Roopa's head away, before pulling it out again closer to the camera, showing the woman's features and dark hair.

The man had entered the police station, in the town of Ajjampura in southern India.

"I gave her all the love I could."

Satish replaces the head in the bag before telling cops that his wife was cheating on him and he had lost his temper after see her with another man.

He continues to complain that Roopa had chosen his rival, named as Sunil, over him despite the fact the man was a manual worker with a criminal record.

Cops had to calm Satish down so they could begin taking his statement and launch a formal murder investigation.

Inspector Ramachandra Nayak said Satish had been remanded in police custody after showing officers where he had left the rest of his wife's body.

Supt Annamalai said: "Generally, in the Ajjampura area, whoever commits murder surrenders to the police but for someone to walk in and place a head on the sub-inspector's table was something new for us."