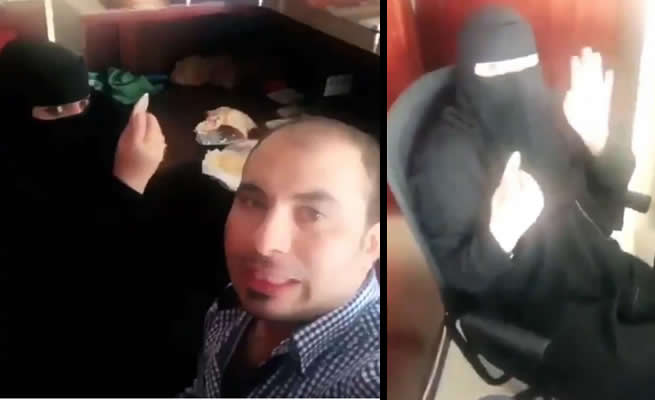 Saudi authorities have arrested an Egyptian hotel worker who appeared in what officials described as an “offensive” video eating breakfast with a female co-worker.

The footage – which was filmed by the man and showed the pair sharing a meal at a desk and joking together – sparked outrage on social media in the ultra-conservative kingdom.

The woman, draped head to toe in Islamic niqab, is seen waving to the camera and eating breakfast. The video has been shared widely on social media where it has caused outrage. The point that has prompted the most anger is at the end of the 30-second video when the woman appears to feed the man.

“The labour ministry arrested an expatriate in Jeddah after he appeared in an offensive video,” the ministry said.

Local media identified the man as an Egyptian national.

Strict segregation between men and women is enforced in Saudi Arabia. In workplaces and many restaurants, women and men who are not close relations must sit separately from one another.

Women are also not allowed to go about many activities without being accompanied by a male guardian – often a male family member.

The ministry said the hotel owner had been summoned for failing to adhere to government regulations that stipulate a gender-segregated workplace.

As the video sparked a torrent of criticism from arch-conservatives, the public prosecution urged expats in the kingdom to respect “values and traditions of Saudi society”.

The incident comes in the midst of Crown Prince Mohammed bin Salman’s far-reaching liberalisation drive that has ended a decades-long bans on women driving, has seen cinemas reopen after 35 years, and some mixed-gender concerts allowed.

The backlash underscores the challenges facing the prince as he seeks to modernise a country steeped in conservatism.

In April, Saudi sports authorities shut down a female fitness centre in Riyadh over a contentious promotional video that appeared to show a woman in tight gym clothes.