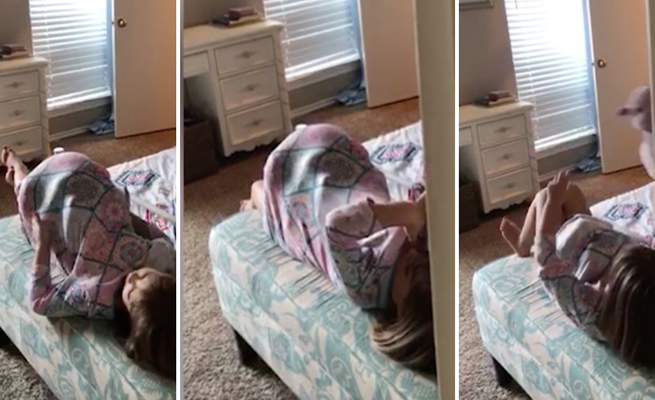 Four-year-old Adelaide Garvin, was caught by her mother Christi, panting, moaning and lying on her back to mimic giving birth.

This is the adorable moment an expectant mother caught her toddler 'giving birth' to a teddy having watched all her pregnancy DVDs. After mere seconds, Adelaide produces a teddy bear from underneath her T-shirt as if she's given birth before returning to her bed.

This probably isn’t what you expect to see your daughter doing when she’s playing alone in her room, but mom Christi Garvin found the entire scene adorable.

Her daughter, 4-year-old Adelaide Garvin, is hard of hearing and hasn’t fully developed her sign language skills yet. “Because her speech and ASL isn’t at a point where she can relay back what she is learning,” explains Christi, “watching her act it out is how I know she is grasping what we are teaching her.”

Of course, Christi wasn’t trying to explain the details of labor and birth to a 4-year-old. But considering the mom is expecting her second child and has videos on motherhood around the house, it was inevitable that Adelaide would pick up on a few things, and she decided to imitate what she’d seen.

Christi managed to film Adelaide acting out a “birth” of her stuffed animal. The child can be heard moaning while lying on her back, before finally pulling a teddy bear out from under her dress. According to Christi, “This was just the cutest thing ever. She will do this for the entire day. She absolutely loves having baby in belly like mommy does.”

There was something different about the scene though: “This is the first time I have seen her mimic labor, but I am sure it won’t be the last.”

Christi said: "One of the biggest blessings of this experience is being able to teach Adelaide about pregnancy and babies. It is so adorable watching her become excited for what is going to happen. Because her speech and ASL isn't at a point where she can relay back what she is learning, watching her act it out is how I know she is grasping what we are teaching her. Now, we can only hope my labour is as quick and simple, maybe without the llama at the end though."