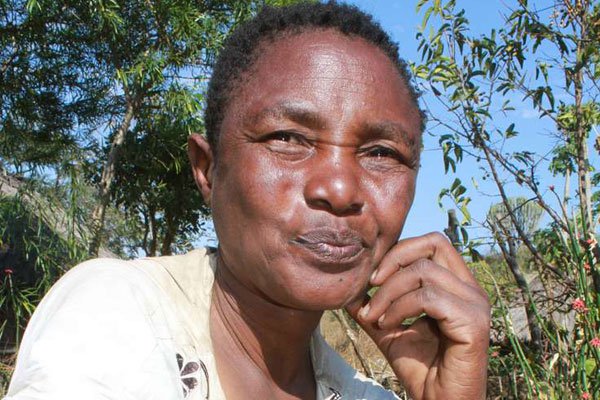 One woman in Makueni County has just revealed that everything is possible as much as it seems impossible. Rael Mukeka a 35-year-old woman from Kathekakai Market in Makueni County in Kenya is married to not only one but two husbands with 11 children from both men. She has spent much of her life in marriage something she does not shy away from revealing. She first got married at the age of 10.

According to her revelation Ms. Mukeka said, “I married my first husband in 1992 and we were blessed with our first child the following year. I have had 10 other children since then.”

She went to school up to Standard Two at a public school, worked as a maid at a neighbour’s home, and got married in the same village.


She further said, “The second husband came when I had seven children already. He didn’t like taking care of the children unless some of them were his and this is how we ended up getting more children.”

According to Mukeka she had a bad habit of taking drugs including drinking, khat chewing and snuff taking, which she revealed to have stop through doctor’s orders.

“My only mistake is that I settled on men who are not rich, but this does not worry me much because they are caring and loving,” she chuckles, recalling a recent incident in which her husbands joined forces to care for her during an illness.

In addition, “One sold all his three goats and a kid to clear the hospital bill, while the other provided the money we needed for the day to day upkeep.”

Apparently, Mukeka decided to marry another husband who would fulfil her physical needs as his first husband, Muema Nguu, who is now 50, and sickly, at the time. She had confided in her mother about the problem before taking in the second man. Muema also sanctioned the idea but asked to meet his would-be co-husband first as a condition.

She further reveals, “It got to a point where he advised me to identify one man and officially introduce him,” she says, echoing Mr Nguu’s account of the events leading to the compound marriage.

“It was a difficult decision. It was preceded by a difficult period in which I had become weak after suffering a long illness,” says Muema

Despite a deal they had struck, which was witnessed by a local elder and one of their adult sons, Mr Nguu at first struggled to come to terms with the relationship.

He says: “Upon realising that he had impregnated her I got mad and warned that such should not be repeated”.

Years later and three other pregnancies down the line, he has embraced his co-husband with whom he has a lot in common.

The two were orphaned at infancy and worked as casual labourers at the homes of their neighbours in their childhood after dropping out of school for lack of fees.

“My relatives are not happy with this arrangement, but every time they complain I remind them that they have refused to help me raise my children,” says Mr Nguu, regretting that his children have not got a proper education.

Mr Nguu says that some of his adult children are yet to come to terms with the compound marriage, something that has been worrying the extended family.

“Our main worry has always been that she has been identifying them with their different fathers. We have always advised that she treats them equally and that she stops telling them that they belong to this or that husband,” says Mr Timothy Mutua, a neighbour and distant relative.

“His children call me ‘Dad’. When he is unable to clear school fees, I get him sorted out. He reciprocates when I am in a financial mess and he is better off,” says Mr Nguu’s co-husband, Mutuku Muia, 45, who works as a farm labourer.

Unlike Mr Muia, who spends all his nights at home, Mr Nguu comes home at most twice in a month.

Ms Mukeku says that whenever her husbands happen to be at home at the same time “they do not fight over anything because they agreed to be in this relationship”.