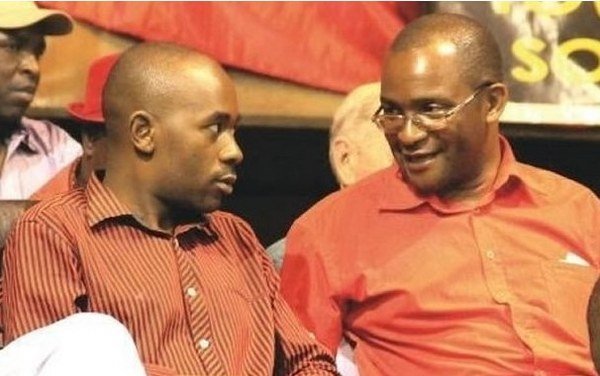 Zimbabwe’s main opposition party, the Movement for Democratic Change (MDC), is facing another split ahead of its elective congress scheduled for next February.

The division is the latest setback to the party, still reeling from a loss in the general elections held on 30 July. It has emerged current president, Nelson Chamisa, and secretary-general, Douglas Mwonzora, are involved in a fierce contest for the top position.

Sources privy to the stormy developments said Chamisa’s acolytes, among them youth spokesperson Clifford Hlatshwayo, had pushed for a resolution to have the MDC secretary general expelled from the party.

“They wanted him fired for reportedly getting support from war veterans leader Victor Matemadanda. They argued it was a sign Mwonzora was working with Zanu PF to destabilise the MDC including during the elections,” said a source.

Founding leaders of the party reportedly prefer Mwonzora to Chamisa, while the latter’s loyalists are pushing for the suspension of the secretary-general over his bid to challenge the leader.

Hlathswayo reportedly received support from other pro-Chamisa party members. But they were shocked when Shaky Mukoyi, commander of the shadowy ‘vanguard’ paramilitary group allegedly used by Chamisa to terrorise rivals, jumped to Mwonzora’s defence.

“It was a shocking moment,” said the source.

“Mukoyi said the party needed to move forward and this could not be achieved by sacking leaders.”

“There was momentary chaos. If anything, the signs were there even before the meeting because angry youths milled outside the party headquarters openly declaring their support for Mwonzora,” said the source.

Mwonzora is said to be facing charges of bringing the party to disrepute.

An MDC-Alliance national council member said Chamisa was threatening to use his powers to suspend and expel officials opposed to his leadership.

Morgan Komichi, MDC-Alliance national chairman, dismissed rumours of a split and accused Zanu-PF and the military of infiltrating the party and creating a wedge between Chamisa and Mwonzora.

The alleged drift between Mwonzora and Chamisa comes as the alliance is said to be preparing for a congress. MDC Alliance spokesperson Professor Welshman Ncube spoke of a congress where everyone will be treated as equals and all positions would be vacant.

"At congress, everyone will be treated the same, as equals, and all positions would be vacant. The aim going forward now is to build the MDC Alliance movement starting from branches, going toward committees, in every village and so on," he said.

In the chaotic period following founding party leader Morgan Tsvangirai’s death February this year, Chamisa rejected calls for a snap congress leading to a split with co-vice president at the time Thokozani Khupe who now holds rights to the MDC-T name.

Chamisa is reportedly now planning to reconfigure the pre-election coalition MDC Alliance he cobbled with six other fringe parties into a proper party.

This could pave way for the full return of former secretary generals Welshman Ncube and Tendai Biti who engineered the party’s splits 2005 and 2014 respectively.

Chamisa and Mwonzora’s clashes go back to the MDC-T’s 2014 congress when the two locked horns for the secretary general’s position won by the latter.