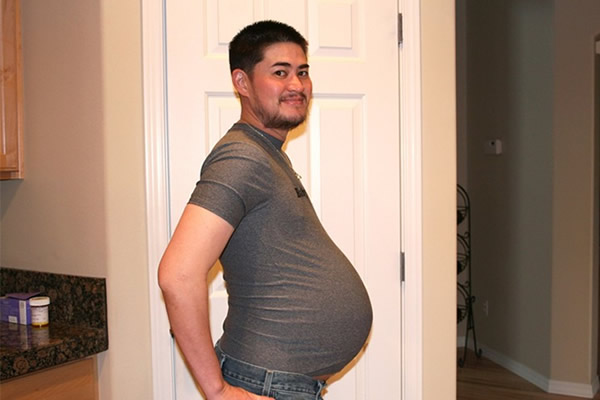 THE world's first pregnant man has admitted he wants more kids – but his wife has told him: "do it yourself".

Thomas Beatie today insisted his family life was "normal" as he discussed his future with second wife Amber Nicholas and son Jackson.

The American shocked the world after he was pictured clutching his baby bump, flat-chested and bearded after having gone through gender reassignment surgery.

Thomas, of Phoenix, Arizona, gave birth to three children with his first wife before the marriage broke down, since marrying Amber.

And the dad admitting on This Morning he still hopes to have more kids.

Speaking with hosts Eamonn Holmes and Ruth Langsford, he said: "I would if I could. We still have frozen embryos related to this guy here, so it's a big decision we have to make.

"She said if I wanted a girl I would have to do it myself."

Wife Amber added: "He would probably have ten."

But Thomas said if he did get pregnant, the child would have to be born via C-section, as he has undergone genital surgery since the birth of his first three children.

He said: "I wouldn't rule it out completely.

"I have had lower surgery so I would have to have a C-section – I wouldn't want to tear anything unnecessarily."

The couple said that while they recognised their life may seem "different" and "special", they considered themselves like "any other family".

And Thomas revealed he had "zero" regrets about making his own story public – including the controversial pregnancy shots shared in 2007.

He said: "I feel that photo was provocative but it sparked conversation, which is important.

"It was an image people weren't used to seeing but they will continue to see it. It's not something to hide, it's something to be proud about."