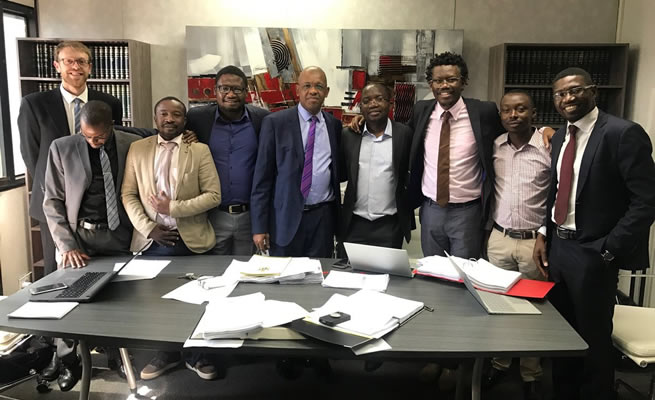 Yesterday it was reported that EFF national chairperson advocate Dali Mpofu arrived in Harare to again lead the legal team that will challenge the results of the recent Zimbabwe elections on behalf of the MDC-Alliance and its presidential candidate, Nelson Chamisa.

Many MDC supporters on Twitter expressed their approval of the fact that Mpofu is representing the party, noting that Mpofu is a renowned advocate. One user said it showed that the MDC “means business”.

Remember this tweet when you see Dali Mpofu, renowned adv Tembeka Ngcukaitobi, Chris McConnachie & Jason Mitchell in the courtroom championing their expertise on behalf of the MDC Alliance

However, others pointed out that EFF president Julius Malema recently said that Chamisa should accept the election results, and that it was therefore inconsistent for Mpofu, as a prominent member of the EFF, to represent the party.

Mpofu has stressed several times in the past that his role as an EFF member and as an advocate are separate. He has been involved in a number of cases, some of which are ongoing, that some have felt were perhaps a strange pick for someone who is one of the EFF’s top five.

These have included representing Gareth Cliff after the celebrity successfully challenged his dismissal from reality show SA Idols, his recent representation of suspended Sars boss Tom Moyane and his current role in handling the Competition Commission’s case against currency traders.

This is so confusing. @Julius_S_Malema said the the MDC must accept the outcome. Dali Mpofu is set to challenge the outcome. https://t.co/heNZv8JHpw

On Thursday it was announced that Zimbabwe’s Constitutional Court had set a date when it would start hearing arguments in the application by Chamisa to challenge the presidential elections results announced by Zimbabwe Electoral Commission (ZEC).

The court said the application would start on August 22.

The setting of the hearing date is despite frenetic efforts by the ruling Zanu-PF to have the election challenge thrown out on a technicality. The party said the papers were not served at the address of the president-elect, Emmerson Mnangagwa, provided to the ZEC for purposes of the election.

Chamisa spokesman Nkululeko Sibanda announced the date, saying: “Case to be heard at 10am on the 22nd of August.”

It is not yet clear if the hearing will be done with cameras watching.

Mnangagwa, in his founding affidavit submitted to the ConCourt courtesy of his 12-member legal team, trashed Chamisa’s application, saying it was not bona fide, but a tactic meant to delay his inauguration as the duly elected president and to also find an opportunity to make a political statement in court.

Zanu-PF had on Wednesday filed its counter-petition.